Source: The Independent
Bleak but moving tale of the apocalypse 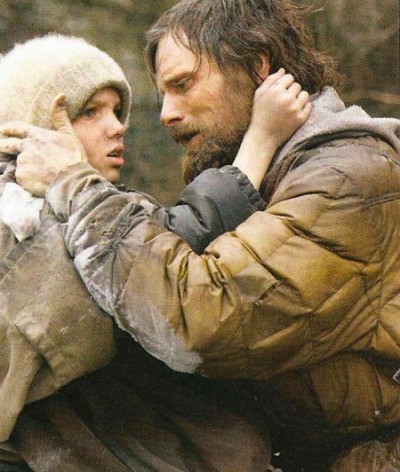 The Road, the very long-gestating adaptation of Cormac McCarthy's novel, was originally due to be released almost a year ago. Its long delay led many to speculate that the film was in trouble. It was very hard to see how a novel as stark and pared-down as McCarthy's fable about a father and son roaming a post-apocalyptic landscape could be made the stuff of cinematic drama.

In the event, John Hillcoat has made a film of power and sensitivity that works remarkably well on the big screen. It plays like a Dystopian version of Huck Finn. "Tattered gods slouching in their rags across the waste," was how McCarthy described the father and son on their grim odyssey south across America toward the coast.

The film captures well the strange mix of heroism and seeming futility that characterises the journey. What is most impressive is the restraint the filmmakers bring to their material. The look of the film is muted and grey other than in the flashbacks to the pre-apocalyptic moments that the man (Viggo Mortensen) enjoyed with his wife (Charlize Theron) before the world ground to a halt.

The music by Nick Cave and Warren Ellis is likewise understated. We don't hear Cave wailing out murder ballads. Instead, the score is used in ominous but understated fashion to accentuate the feeling of loss and foreboding that runs throughout the film.

The Road must have been a plum job for the production designers. They clearly relished helping create the barren landscapes, eerily empty cities and dust-covered houses that fill the film. In other hands, The Road might have played like a slightly artier version of the many post-apocalyptic zombie or horror movies that have been made in recent years. There are plenty of macabre elements here - skulls on sticks, blood-drenched ground, cannibalism, naked humans kept locked away in basements by grim-looking backwoodsmen.

However, Hillcoat eschews morbidity for its own sake. His focus is more on the relationship between the man and the boy. The father comes closer and closer to losing his moral compass and becoming like "the bad guys" It's his son (Kodi Smit-McPhee) who both gives him the reason for persevering with the journey and pulls him back from his own will to violence.

At points, the film is so earnest that it risks becoming inadvertently comic. Hairy, mud-encrusted men wandering across bleak landscapes eating precious tins of fruit can't help take on an absurd aspect. However, the craftsmanship here generally keeps the risk of self-parody at bay.

There is a moving cameo from (an unrecognisable) Robert Duvall as a dying old man the two travellers briefly take pity on and a slightly eccentric late appearance from Guy Pearce as another survivor.

The Road is short on dialogue and very bleak in subject matter but nonetheless makes absorbing and affecting viewing.