Viggo Mortensen on working with Robert Duvall in 'The Road' 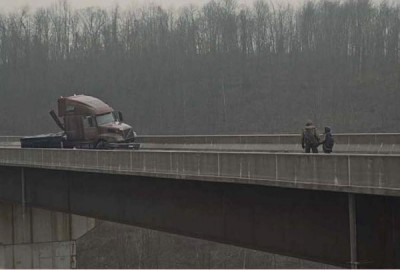 Image Macall Polay.
© 2929/Dimension Films/MGM.
I spoke briefly with Viggo Mortensen at the Telluride film fest over the weekend, fresh off a tribute at the Palm Theater the night before and being gracious as ever with his time. The last time we spoke was four years ago for A History of Violence and as ever, he's a soft spoken guy who can fill a digital recorder with wall-to-wall perspective. Sometimes you just feel guilty interjecting with a question.

But something I had to ask Mortensen concerned my favorite scene from The Road, a back-and-forth with Robert Duvall that could have been more but nevertheless comes close to representing the best a story like this has to offer, I feel.

The scene is in the book so it's nothing much in the way of a spoiler. The Man, The Child and the Old Man (the actual character names, for those unaware) sit by a campfire discussing, briefly, their lives before whatever calamity has struck their world. Mortensen spoke with clear reverence for the opportunity to work with Duvall, as well as real joy for living and free-wheeling in the moment as a pair of actors working through a key scene.

"What was interesting about that was it was going fine as scripted and Duvall was such a great actor that it was really good. But there was time for one more before we lost the light. We looked at John [Hillcoat] and he says, 'Yeah, we can do one more.'

We were just sort of sitting talking as they were setting up the camera and getting the fire ready for another take. We talked about, 'Well let's forget everything, let's just do one for ourselves. Let's just let things happen.' There was nothing calculated. It was just like, 'Let's just open our hearts,' I guess, without saying it that way as much as we can and see where it goes.

Suddenly he said -- it was not scripted and added that other layer -- he just threw me that line: 'I had a boy once.' And I suddenly realized, 'Wow, okay.' And I just went with him, you know? And what happened to him. All of a sudden it was just magic. It was beautiful to watch him."

Mortensen talked at length about the work of cinematographer Javier Aguirresarobe's work in the film. Being a photographer himself, the actor appreciated watching the lenser work and was captivated by how he "painted" the film with the light available to him. He also spoke about working with Charlize Theron, which he enjoyed quite a bit and said he felt elevated the character from her depiction in Cormac McCarthy's novel quite a bit.