By - translated by Remolina and Sage 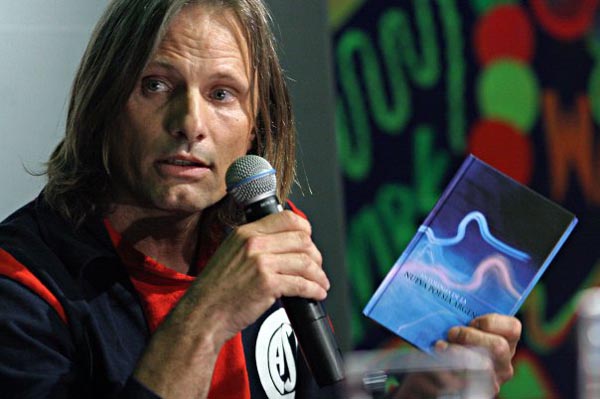 Presentation of the book Nueva Poesia Argentina ….
© CCEBA.
Actor and publisher Viggo Mortensen, famous for his work in The Lord of the Rings trilogy, yesterday evening at the Centro Cultural España presented the Anthology of New Argentine Poetry, which includes the work of 22 local poets from the so-called 90's generation.

In a room crowded with writers, journalists, J.R.R. Tolkien admirers and some fans, Mortensen introduced the new book published by Perceval Press publishing house which he founded in the United States and which has published around 30 books of literature and art by authors and artists not widely known or "who had not had the opportunity to be published in an appropriate way."

Wearing jeans, sneakers and a San Lorenzo jersey, and sitting in front of a "crow" graffiti from an exhibition of Peruvian art, a relaxed Mortensen contrasted with the nervous audience and the anxious press, which crowded the door at Paraná 1159 when there was no more room.

Accompanied by the anthology's editor, Gustavo López, - who one by one presented the poets, who in alphabetical order went up to the microphone and read their work- Mortensen emphasized "the coexistence of different ranges and the diversity of the poets" brought together in the book, which originally was four times its size, going from an initial concept of 500 pages down to 122.

This Argentine born in Boedo [sic], who has lived in North America since he was 11 years old - already four decades - was especially grateful to independent and small publishing houses such as Ediciones del Diego, Eloísa Cartonera, and Mansalva, "who made the texts available and gave their support to the project."

"Perceval Press makes an enormous commitment to its books," said curator Kevin Power - who collaborated in the selection of poems - as well as the edition of an anthology of Cuban texts from the Nineties "when the United States did not want to publish anything from that country" - and added that this book "has an impact because it brings together the most radical changes in Argentine poetry."

"There are poets who work with the language; others say they forge links between the world and language; others work with the musicality and not the sense; and another value is everyday language; this is why this anthology is important," says the curator, who was also accompanied at the table by the head of the CCEBA, Ricardo Ramon Jarne and by the Spanish ambassador, Rafael Estrella.

Mortensen presented the poets just after reading his own brief poem Hillside and expressed his "pride" at being able to publish this edition, which was born in the San Lorenzo stadium, while he followed matches with Fabián Casas, who together with Washington Cucurto were the only ones absent at the reading.

From Housewife to Stay-at-home Mom, an ironic and sweet poem by Fernanda Laguna, which is not included in this anthology, was the poem that caused the most applause among the crowd and the presenters, who laughed while she was reciting: "Good! Lovely! There's nothing I like more than connecting the hose, setting the drain at 5, and putting the detergent and the softener in the washing machine."

The list proceeded in an organized way, and the turn came for Santiago Llach, who joked about never having seen so many people at a "poetry reading"; Daniel García Helder, Francisco Garamona, Martín Gambarrotta, Juan Desiderio, Gabriela Bejerman and Mario Arteca had also been invited.

Part of the live reading went as follows: Marina Mariash goes on stage, takes the book that is on the presenters table and looks for her poem.

After spending some time finding it, she takes the presenters microphone; López tells her that she must be in front of the microphone stand, where at least 10 people have already read before her: "It's because I was late", she says and starts reading her Song While I'm Cooking.

"Books are for sale in the reception; please, buy poetry," Jarne is heard saying over the loudspeakers after the final applause and after a swarm of fans have crowded in front of Mortensen, books in hand, to get an autograph.