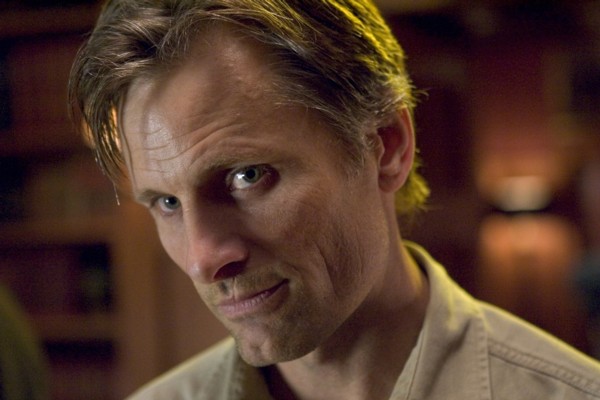 © New Line Productions Inc.
Anyone who has seen the attention-grabbing trailer for A History of Violence, with its emphasis on images of Viggo Mortensen packing heat, might conclude that the tagline is ''Aragorn: No More Mister Nice Guy.'' If fantasies of the king of Middle-earth kicking butt is what it takes to bring the curious to David Cronenberg's brilliant movie -- without a doubt one of the very best of the year -- then I'm all for misdirection. But you deserve to know that the tease echoed in the picture's blunt title -- the B-movie come-on that here's an action picture about bloody vengeance in a small town -- is a perverse simplification of everything that makes the movie great. In my ideal coming attraction, we'd see little more than scenes of utmost dailiness: Mortensen as family man Tom Stall, passionately in love with his wife, Edie (Maria Bello), happy with his kids, content in the friendly business of running a neighborhood diner in Millbrook, Ind., and blessed with average, taken-for-granted American freedom and prosperity at its most Rockwellian. That's it, that's the setup, with maybe the merest hint that Tom becomes an unwilling local hero when he defends his place of business against vicious would-be robbers who threaten his fellow citizens. For visual spice, a few glimpses of Mortensen and Bello engaged in conjugal bliss would suffice.

Come for the calm, stay for the storm, because the movie is about the opposite of revenge. It's about the violence that surpasseth all understanding -- a cataclysm of awful (and sometimes funny and sometimes horrifying) consequence that unfolds with insidious intimacy and a Cronenbergian delight in the animal squish and shock of torn bodies. Tom's newfound media exposure (''It's the best thing anyone could have done to them,'' he naively blurts to a TV reporter about his brush with the diner bad guys) brings him to the attention of menacing out-of-towners who cruise into Millbrook in a big black car, none more menacing than the silky, scar-faced thug who calls himself Fogarty (Ed Harris) and claims to know Tom as a killer named Joey. ''They don't like this guy they think you are,'' Edie says, trying to make sense of the absurd alternate reality that begins to consume the entire Stall household. Who is this average Joe?

Whether violence begets violence, whether perception is reality, whether a destructive animal instinct for combat really is lodged in the peaceful heart of every man -- these are the themes that entertain Cronenberg, the Canadian original who made Dead Ringers and The Fly. (Also up for discussion: Whether the gunshot blast that shatters the small-town peace is a particularly American scenario.) But in his most deceptively ''mainstream'' of entertainments, the filmmaker is enthralled, too, by the simple mechanics -- the visceral fun -- of making movies. There's not a scene wasted in the 97-minute unspooling, not a detour that doesn't tell, surprise, horrify, delight. (At times our laughter is as shocking a response as our excitement, and there's plenty of cause for it when William Hurt makes a galloping cameo appearance.) There's not a slack measure of music, either, in Howard Shore's resonant score, which plays off the plainspoken aural simplicity associated with Aaron Copland to convey the melody of people who feel caged by dread, even though they're surrounded by prairie bigness.

A History of Violence began as a graphic novel, written by John Wagner and Vince Locke, and the well-built screenplay by Josh Olson reflects the black-and-white speed of the original medium. But much of the movie's richness comes from the way the filmmaker takes detours along the road to the Stall family catastrophe, finding expressions of psychic entropy even in the way the Stalls sit at the breakfast table. A world of change -- a fall from innocence -- is enacted in two contrasting sex scenes between husband and wife, while some of the best, most powerful moments are those that occur between Tom and his teenage son, Jack (Ashton Holmes, making a terrific feature-film debut), a baffled kid undergoing his own crash course in adult ethics.

A History of Violence is fundamentally a history of men at the throats of other men; Edie is the sole woman in this American tragedy, and although the character is given dignity and autonomy (Bello imparts information about Edie with physical precision, never standing next to Mortensen the same way twice), it's a testosterone jungle out there. That it's also a Garden of Eden gone poisonous -- to hell -- is something no coming attraction can convey.