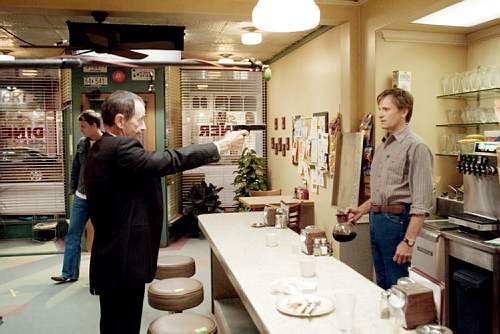 © New Line Productions Inc.
Film noir cannot vary itself into just any literary shape, because the characteristics of the genre demand a certain kind of story. If you depart too far from those story elements, which include a certain set of characters and a certain kind of ending, you cease to do film noir. Maybe you're doing a commentary on noir, but you're not doing noir.

But perfectly executed noir is great stuff, and I'm willing to forgive it its inherent shallowness. So when I saw David Cronenberg's new noir, A History of Violence, I was completely blown away, because it maintains all the characteristics of true noir, yet manages to be deep. This may well be Cronenberg's masterpiece, and it makes me excited to see what this master has in store for the final act of his own career.

One day, two cross-country killers come into Tom's diner to extend their murder spree. Unfortunately for them, Tom is way better at killing than they are, and the two bad men wind up shot dead on the floor with their own guns.

Unfortunately for Tom, this makes him a local hero, and when the media descend on his Eden in Indiana, his face is splashed all over the cable news. This attracts exactly the kind of attention that Tom has been avoiding for years, and the next thing you know, a vicious, East Coast mobster (Ed Harris) shows up, claiming to know Tom as "Joey," and seeking revenge for some ancient wrong.

At this point, the plot twists with the deftness of a James M. Cain novel, and we're plunged back into a style of filmmaking that seemed to have been lost nearly 50 years ago.

Cronenberg does some amazing work here, and if they gave "best director" Academy Awards to people who showed extreme skill at directing, he would no doubt receive one for this film. So many little elements add up to perfection here that it's impossible to list them all.

First off, there's the overwhelming slowness and quietness of the film as it builds to violence. There's very little incidental music, and what there is, is extremely subtle. Further, Cronenberg pays loving homage to older films by using techniques that have completely dropped out of favor in the last half-century. For example, he does an old-fashioned jump cut. This term now is generally applied to a cut that shows a continuity error, but it used to mean a cut that was made from a medium or long shot to a close-up, but without changing the angle or direction of the camera, and without any indication of the passage of time. It was common during the period of black-and-white filmmaking, but it's almost unheard of these days.

Cronenberg also uses a palette of autumnal colors that give the film a sense of timelessness, as though Tom's little town could exist at any moment in American history. Cronenberg has employed his usual cinematographer, Peter Suschitzky, whose subtly menacing and muted work lends the film, at least in its first third, a feeling of tremendous ordinariness.

The dialogue, too, seems from another era. Slow, and in short sentences, it's compelling even when nothing is happening, because it lends the hint of some deep wrongness. Most remarkably, the film is completely devoid of lines that feel expository, even though most of the story takes place prior to the start of the film and is conveyed in the dialogue. The actors reveal this background in the most uncannily natural way imaginable, filling in only those parts of the backstory that can be made to fit easily into the flow of the speech and narrative.

But I think the most amazing thing about this film is the way that it handles violence. Let's face it: We love violence, and we love revenge. If that weren't the case, then our cinematic landscape would be completely different. What Cronenberg does is something that past masters like Peckinpah and Kubrick used to do: He includes the violence that audiences clamor for, but he makes it shocking and unpalatable. And he does this even when he's paying off the audience with violence committed against horrible people who deserve their fate.

The violence here spreads like a disease and gains power through its inherently rewarding nature. After Tom Stall kills the burglars, his son, who has shown himself to be verbally adept at getting out of fights with a schoolyard bully, decides to try violence instead. Even though the bully deserves a beat-down, the results are horrifying. When Tom tries to chastise his son, he says, "We do not hit people!"

"Yeah," says the son, "you shoot them." Even the highly justified killing in the beginning of the film is deftly drawn into question, and not in a heavy-handed, moralistic way. Rather than a lecture on violence, this is a quiet demonstration of its effects on personality.

Mortensen and Bello are particularly good. In two extremely charged sex scenes, we watch their relationship change as violence enters their lives. They want to reject it, but both of them are innately, almost animalistically drawn to it.

I really can't say enough good things about this movie. It gives the audience exactly what they want, and then makes them think about why they wanted it. The ending, which cuts to black after a very short scene, is genius: It is Cronenberg's way of saying, "What do you think happens next?" I think it's something uncomfortable. If this were a normal Hollywood revenge flick, it would be something joyful. Cronenberg leaves it to you.