The Dark Side Of The Hero

By Walder & Castro - translated by Graciela, Remolina and Zooey 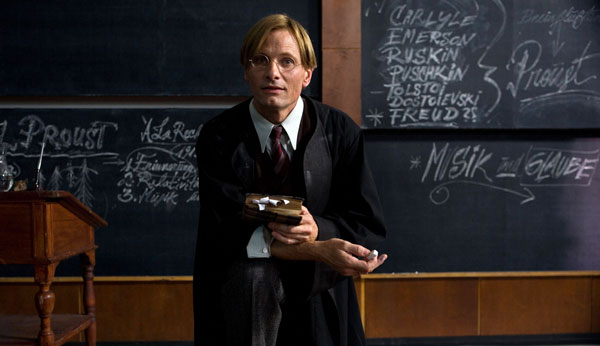 Image Larry Horricks.
© Good Films.
While shaping new projects in Spain, Viggo Mortensen plays a lecturer seduced by Nazis in Good. The call from New York is late. He apologizes: "I was held up. The plates for the book's proofs are to blame." Viggo Mortensen, as well as being an actor, [New York, 1958], is a poet, a musician, a painter, publishes art and poetry books in his publishing house Perceval Press. Reserved and very jealous of his private life, he's going to protect it during our talk (in the Spanish learned in Argentina during his childhood), with the same skills with which he handled the sword as the loyal Aragorn or the brave Captain Alatriste, but, this time, without a drop of blood. Viggo Mortensen is, besides a great actor, an inexhaustible conversationalist, so full of curiosity that he doesn't hesitate to occasionally take the role of the interviewer. He's now waiting for the opening of The Road, an adaptation of the chilling novel by Cormac McCarthy. In Good, the film showing in our country these days, he plays a selfless family man in Nazi Germany that makes small decisions that will have devastating effects on his surroundings.

MC: Your character becomes something terrible while he barely notices.

VM: The scary thing about Good is that the characters are almost like us. It gets us nowhere saying that the Germans in the 30s were wired differently and that's why they became Nazis. What happened back then can happen again anywhere. The most terrible events happen little by little, step by step.

MC: Didn't you feel weak in the knees when you saw yourself in the Nazi uniform?

VM: I did not like it, I felt uncomfortable. The first time I tried it on, I told the costume designer: "Is the hat that tight, are the boots that stiff?" I realized I felt bad because of the meaning I assigned to that uniform.

MC: In the movie, the music defines a clear boundary between fiction and reality in the life of your character. How is music important in your life?

VM: I like music very much, and as an actor, it has helped me to get under the skin of many of the characters that I have played.

MC: And if I tell you: "My passion is red and blue and it asks for your fervor", does it ring a bell?

VM: It is a tango that I changed a bit to sing it to my team (laughs). Yes, I sang it for San Lorenzo de Almagro.

MC: Are you passionate about soccer?

VM: I am passionate about soccer and about my team, but I am not a fan that will go and get in a fight . Soccer is a celebration and life should be a celebration too. There are times when celebrations are sad, but life is still a celebration.

MC: Are you always so positive?

VM: Almost always, but at times, I'm not. Often I wake up thinking of all the bad things that could happen. It's my way of facing the day; I'm cautious. You could always fall down the stairs...

MC: You have a long career as a poet. Do you prefer words of love to be written or heard?

VM: It depends on the woman. If I truly love her and I see that she also feels something important about me, I write it to her and I say it to her.

MC: Are you a dreamer, or do you leave that for the movies?

VM: I am a dreamer, but I'm careful with that. You can't lose sight of what is really happening.

MC: Are you a man of action or reaction? Do you observe life or live it?

VM: I react. I stay open to the fact that something could change suddenly, for whatever comes, because if I don't, I'm going to lose a lot...

"The first time I was in Spain was in the '70s. Afterwards, thanks to my Spanish friends, I knew the country pretty well. I like the rhythm of life; it reminds me of my childhood. During the shooting of Alatriste, we were on the border between León and Asturias, and I fell in love with that landscape. Madrid is very pretty to walk in; it doesn't have the ocean, but it's very beautiful. I also like to cook like they do in Spain, chatting with friends and eating slowly. I might make some shrimp with garlic. In October I'll be returning to Madrid for rehearsals of Purgatorio, a play by Ariel Dorfman that will premier in December at the Matadero."
Top of this page
Last edited: 12 July 2009 09:44:20