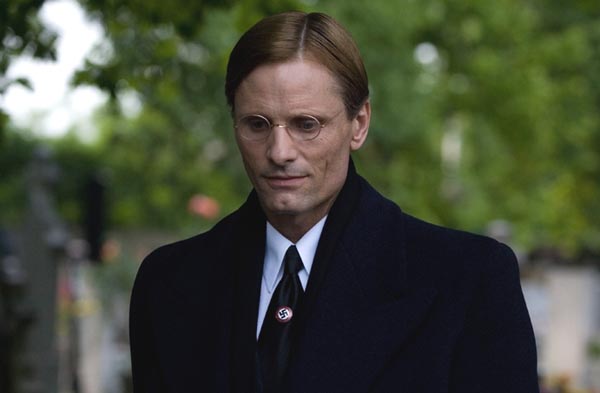 Image Larry Horricks.
© Good Films.
Viggo Mortensen is 50, for goodness sake, but he looks so absurdly boyish I ask if he has sold his soul to the Devil like Oscar Wilde's Dorian Gray, and has a picture of himself in the attic ageing instead.

He laughs at this and says he has made no such deal - he's been genetically lucky - but the Devil pact is quite an apt analogy for the moral dilemmas his character faces in his latest film.

In Good, Mortensen plays German university professor John Halder, an essentially decent man who finds himself embroiled, slowly but ineluctably, in Hitler's burgeoning Nazi party. By the end, he has attained status and rank, but his soul has been defiled by evil.

It was the epic Lord Of The Rings trilogy, in which Mortensen played warrior king Aragorn, that propelled him to global stardom and earned him legions of fans.
Anonymity now eludes him. He has learned what it is to be the persistent quarry of autograph hunters. "I'm having a meal in a restaurant. People will say: 'I don't mean to interrupt' - although they're doing it anyway - 'but can you sign this?'" he says.

Mortensen has never courted celebrity. He is serious about acting; famous for immersing himself so completely in his roles that they consume him. To better understand Aragorn, he camped in the wilderness of New Zealand, where the trilogy was filmed, wearing his character's mud-besmirched clothes.

He pillaged the Norse sagas for references. He even carried his sword into restaurants. And when he lost a tooth in a fight - he does almost all his own stunts - he stuck it back in with Superglue.

With similar diligence, he absorbed himself in the Halder role. "I visited all the concentration camps. You realise carpenters built these places, electricians wired them, and you start to visualise the reality.

"It was awful to see how far all kinds of people - as good, bad and ordinary as we are - strayed off the path of their better intentions. Of course I cried. You would have to have a heart of stone not to be moved."

Mortensen is no bland Hollywood sex god. He was nominated for a clutch of awards - an Oscar, Screen Actors' Guild and Golden Globe - last year for his role as Russian mafia fixer Nikolai Luzhin in David Cronenberg's Eastern Promises.

Cronenberg remarked on his facility for languages: "Mortensen not only mastered convincing Russian, but also spoke Russian-accented English so authentically that natives found him credible."

However, it was an action scene - in which he fights full-frontal naked in a bathhouse - that earned him most attention. Mortensen's torso is heavily tattooed - he researched Russian mafia body art - and he abandoned the towel to make the scene realistic. Small wonder that the Hollywood hoopla of the Academy Awards held no allure for him.

"The Oscars are like a political campaign. Actors are selling themselves before the ceremony and I don't care to do it," he says. "It's nice to be recognised, flattering, and the media circus is seductive if you allow yourself to be pulled in. I'm not saying it's evil, but I viewed it as a tourist.

"I went to the ceremonies on my own or took my mum or my niece, Sydney. I knew it would be a once-in-a-lifetime experience for Sydney, that she'd appreciate it."

I suspect there was a subsidiary reason for inviting family members to escort him: Mortensen has always been reticent about subjecting his love-life to public scrutiny.

His marriage in 1987 to Exene Cervenka, a singer with punk band X, lasted 11 years and produced a son, Henry, 21. Mortensen, his former wife and son remain close. Most recently, his name has been linked with Barcelona-born actress Ariadna Gil.

He is an engaging interviewee, offering a thoughtful response to every question (except the personal ones, which are dispatched in a mumbled sentence).

He is handsome in a Nordic way - his dad, Viggo Snr, is Danish; his mother American. He is fluent in Spanish, English and Danish and gets by in Italian and French. A scarlet bracelet on his wrist proclaims his allegiance to the Argentine football team San Lorenzo. He grew up in Venezuela and Argentina on chicken farms and ranches managed by his father.

His parents divorced when he was 11. Mortensen's own son was a similar age when he and Exene divorced. I wonder if he regrets that Henry is an only child. "I guess if there is any regret, it is that Henry would have been a wonderful big brother."

Mortensen is assiduously polite to fans. Before Lord Of The Rings, he used to answer each letter by hand.

"I realised I was spending hours and hours in the middle of the night signing autographs. Unless I had assistants forging letters and signatures I knew I couldn't continue. So I posted a message on the internet saying: 'If I can't do it honestly, I won't do it any more.'"

The eminently likeable Viggo Mortensen is a rare product of Hollywood. He would not endorse fakery in any shape or form.