Source: Time Out (London)
Time Out talks to Viggo Mortensen about playing a sympathetic Nazi in his new film, 'Good' 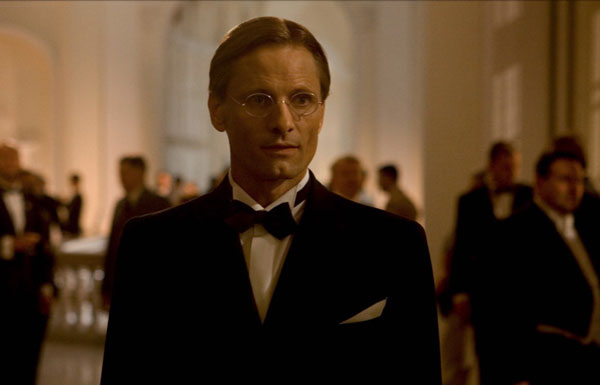 Image Larry Horricks.
© Good Films.
Good is set in 1930s Berlin - but everyone has an English accent.

"I think it was a good choice. A lot of the time in movies of that period set in Germany, you get this hodge-podge of put-on English or German accents. Or, if they're all English and American actors, it's very distracting if everyone keeps their accents. On this one, it was mostly English actors, Hungarians and myself, so with everybody speaking more or less the same, you forget about it. You pay attention to the story."

It gives the themes around the rise of National Socialism a more universal significance.

"It's happening now, it's happened before, when people willingly give up their freedoms. Look at my country and what happened in the past eight years to the judicial system, the laws, the standing of the country. If somebody asked you if you'd be willing to put up with these things, you'd say no. But by having it happen little by little, it's like a death by a thousand cuts, you know? Suddenly, you're bleeding to death."

Are you hopeful about Obama?

"I hope that, as happened with Robert Kennedy, the movement he's created will prod him to go a little further in some areas than he would have. Kennedy wasn't particularly opposed to the Vietnam War, but the movement he created led him to change his position as a result of pressure from the ranks.

And your character in Good is an academic. He's supposed to be an independent thinker.

You've also shot a film of Cormac McCarthy's book The Road. How was that? It's a bleak novel.

"It's closer to the bone than the book. It's a little harsher, a little leaner. Another director other than John Hillcoat (The Proposition), with a big budget, would have made it much more of an effects movie, say a Spielberg. That would have taken something away from it."

So it wasn't like working on the Lord of the Rings movies?

"That was like a circus, a huge factory. By the end, a lot of communication was indirect. The vibe was friendly and teamwork was important, but it wasn't one on one."

Did you talk to McCarthy about this apocalyptic world he creates?

"I was welcome to call him as much as I wanted. In the end we had one chat and we ended up talking about our sons, we didn't talk about the book. I didn't feel I needed to. He came to Oregon while we were shooting. He came with his son, who was the book's inspiration. He was accepting of a different medium but felt it was close. Hopefully he'll like it."

You've now made two films, A History of Violence and Eastern Promises, with David Cronenberg.

"I really like those movies, he's such a respectful director. He's by far the best communicator I know among directors. A lot of them, even the smart ones who are conceptual, don't communicate well, whether it's because they're insecure or far too self-involved. They don't give their crews or cast the information that makes their job easier. Most directors are jerks. They may be talented but they're not very good at talking to people. But us actors can be jerks too."

You got lots of awards nominations last year for Eastern Promises.

"I think only Daniel Day-Lewis was nominated for more. Not that I won any, I won a couple of small ones. Whenever I was available I was part of that awards circuit. It's a strange thing to watch."

"Yeah, but it depends how much you make of it. I mean, most of those guys, they did the whole thing, they went to every event, and I didn't do that. I was working, so I did my job to promote those movies but as far as trying to get a prize, I didn't do that, so I'm surprised I got the nominations. I felt like a tourist, just taking it all in, and between each award I didn't go around doing all the things to appeal to voters. At the same time, of course, it's an honour."