Source: All-Reviews
The author of this review, while being introduced to the phenomenon called "straight-to-video" in the early 1990s, made an interesting observation. It dealt with the trailers of the "straight-to-video" movies. The good trailers usually meant bad or unwatchable movies. The trailer for American Yakuza, 1993 action film by Nick A. Capello, was one of the better ones. But the movie itself was one of the rare exceptions to the rule above; it was surprisingly good and it delivered the goods promised in the trailer. 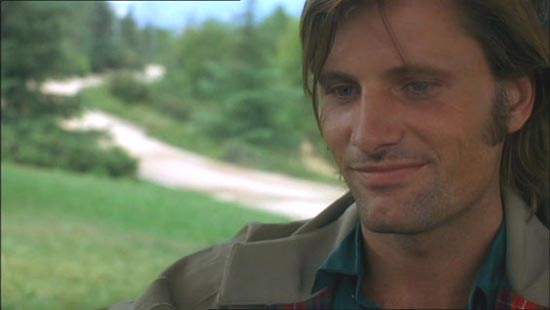 © Overseas Film Group.
The plot of this movie, based on the screenplay by John Allen Nelson and Max Strom, uses the very same American phobias as much more spectacular (and less successful) Rising Sun - phobias based on the great success of Japanese economy in 1980s and the infiltration of Japanese capital into American mainland. But in order for this film to have attractive "straight-to-video" potential, the Japanese invasion of USA happens in the form of yakuzas - Japanese crime organisations that are taking over lucrative crime businesses from the locals like Mafia. Of course, that leads to the series of bloody conflicts and one of the people caught in the crossfire is Nick Davis (played by Viggo Mortensen), convict recently released from prison. He happens to be in the right place at the right time and saves the life of an important yakuza. Yakuza reward him by employing his services and he gradually begins to get their trust and friendship. Of course, they don't know that Davis is undercover FBI agent, now torn between his official duty and the loyalty he feels towards his new friends.

Although the screenplay seems a rather weak excuse for the series of standard action scenes, the writers should be commended because very few of them would use the form of an action movie to preach multiculturalism, like Nelson and Strom do. Of course, the plot is full of simplifications and sometimes not very plausible events, like in many straight-to-video films. But American Yakuza still has a very good impact, because the direction by Nick A. Capello, very MTV-like style (few years before that style became fashionable), reminds the viewers of John Woo's Hong Kong films. The music by David C. Williams is also very good. But the most impressive element of the film is Viggo Mortensen, one of the most capable American character actors, here in a very unusual role of an action lead - tough, but sensitive man with a hidden agenda. American Yakuza is still a low-budget action film in its essence, but the talent of its makers managed to cross the barriers of such genre designation.