The Mob Has A New Enemy

Source: DVD Reviewer
American Yakuza is a stunning action thriller with an impressive sense of style, quality and emotion, very much in the tradition of great gangster movies from the past. American Yakuza captures the terrifying authenticity of the genuine Japanese underworld in a way that films like the Rising Sun can never match. A joint Japanese-American production with technical guidance from real life Yakuza gangsters, this extraordinary motion picture is both today's fiction and tomorrow's reality!

Viggo Mortensen's star is truly rising after his epic performances in the Lord Of The Rings trilogy. Not many people knew of Mortensen prior to this though, except maybe through his co-starring roles in GI Jane and Crimson Tide amongst others. Now you can see another one of Mortensen's pre-Aragorn roles in the re-release of 1993's American Yakuza.

Nick Davis (Mortensen) has just been released from a year in solitary confinement. Out on the streets he finds himself a cheap motel room and gets a job as a forklift driver at a Japanese import company on the docks. Pretty soon after he starts a band of long black limos arrive at the warehouse, which neatly coincides with a hit on said occupants of the big cars. Davis gives the warning that all hell is about to break loose and then helps out the Japanese victims by shooting a few people and using his forklift expertise to spear a car and drop it out onto the street below. Davis saves the life of Shuji Sawamoto (Ryo Ishibashi), who then repays him by hiring him as his assistant.

At this point we find that Davis is actually David Brandt, an undercover FBI agent who is charged with going undercover with the Yakuza. An impending gang war between the Yakuza and the Mafia family led by Dino Campanela (Michael Nouri), makes his mission more dangerous still and leads to a conflict of loyalties as his superiors want him to stand aside from the Japanese Yakuza he is now a part of.

Picture is presented in a 1.78:1 aspect ratio, it's clean considering it's age with lots of moody lighting and post-80's fashion. 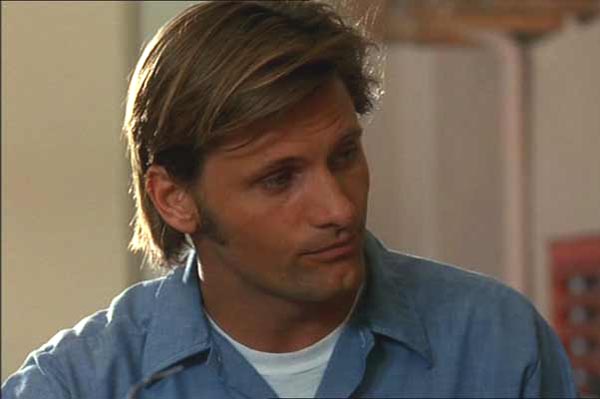 Dialogue is a little low in places, but generally of audible quality. Scored by David C. Williams (Phantoms), the music is suitably moody in the requisite places.

Text biography - post Lord Of The Rings biography of Viggo Mortensen, not that detailed and no mention of GI Jane (!).

Gallery - stills from the film, woo!

Trailer - complete with moody announcement guy over the top.

There have been many 'fish out of water' movies in the recent past, and some have managed the mysterious and ordered Japanese culture such as Rising Sun and Black Rain. Both those films had some depth though and major stars. American Yakuza stars a pre-fame Viggo Mortensen without any kind of established star to back him up. This is pure B-movie stuff where the plot moves so quickly that before you know it, Mortensen has gained the trust of the Yakuza high command, got a nice flat and the goddaughter of his new boss is decorating his flat and sharing his bed. And then we're on to the bloodthirsty finale...

Mortensen and Ishibashi are the centrepiece of this film and their acting is solid, unlike everyone else who is just plain wooden. This is not Mortensen's best acting by a long shot, but without the two central characters you really wouldn't care about this film. Other than the ceremonial, you don't really get an understanding of the Yakuza and the Mafia are just so badly stereotyped it's unreal. The two opposing FBI teams may as well not be there for all the impact they have on the film and Mortensen's partner/handler is totally wasted.

There have been many bad gang warfare films (see Romeo Must Die as an example) and this just about rises above those due to the two leads and the core message of loyalty. Only just though...