Source: The Times
Viggo Mortensen hasn't accepted a movie role for a year, and may never make one again. Why, asks our correspondent 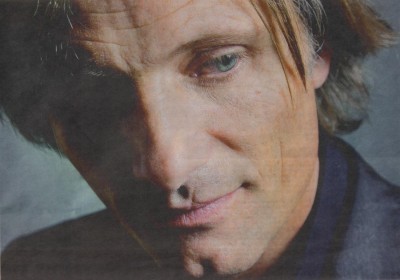 Image Chris McAndrew.
© Times Newspapers Ltd.
Viggo Mortensen should be happy. His past three movies have been critical smashes. He snagged a Best Actor Oscar nomination for one of them (Eastern Promises). And he played the title role in the 11-time Academy Award-winning Lord of the Rings: Return of the King, the last in the most financially successful movie trilogy of all (current global box-office takings: nearly £2 billion). In short, he has finally arrived. And yet, ironically, just when he should, in his own words, "be making hay", the 50-year-old star is abandoning the movie business.

"In the past week I've been from LA to Japan to Korea to Poland to here," he hisses, describing in near disbelief the travel itinerary for his current promotional tour. "It's ridiculous! It's not a healthy way to be. But, as it happens, I'm taking measures to change that." Which are? "No more movies. I haven't said yes to one in over a year. I've been in all these well-received movies and it seems like I should be doing some more, but there's other things I want to do. It's not the right time."

But when will you come back to film-making? When will you know it's the right time? Long, long, pause. A sigh. "I really don't know."

Mortensen has spoken about leaving movies before. "If it all dries up now, I've had a good run" is a favourite refrain. But here, in the quiet ground-floor antechamber of a London hotel, he seems more convinced, and convincing, than ever. He is wearing jeans and his favourite blue San Lorenzo football shirt -- he lived in Argentina until he was 11 and the marine jersey, a nod to his childhood team, has become an off-screen trademark.

His face is granite, and built on the most imposing jawline in the business since Kirk Douglas, but his eyes are soft and expressive, nervous even. He speaks quietly, often just above a whisper, and over the course of our interview he will convey the impression of a Zen-like renaissance man, a poet, a painter and a musician who fell into acting and could just as easily fall out of it again.

For the moment, though, there is Good. Yet another Nazi-focused Second World War movie, following on the heels of Tom Cruise's Valkyrie and Kate Winslet's The Reader, Mortensen's film is by far the smartest and also the most difficult of the bunch. Adapted from a play by the British-Jewish playwright Cecil Philip Taylor, it describes the incremental seduction of a German Literature professor, John Halder (Mortensen), by the sinister forces of National Socialism.

Thus Halder is introduced unequivocally as the movie's hero. Like us, he is a moral being, not a fully fledged Nazi, and is indeed repulsed by the movement. But over the course of the movie, and in the name of stuttering compliance, he agrees, first to join the party, then to wear the party pin, then to accept a nominal appointment to the SS, and so on. Until finally, amid the chaos of Kristallnacht in 1938, he finds himself standing in front of his bedroom mirror in full jack-booted glory, getting "oral pleasure" from his suitably wowed girlfriend in one of the most worryingly kinky scenes to hit the screen since Dirk Bogarde and Charlotte Rampling had an S&M Nazi smackdown in The Night Porter.

"Everywhere I've seen this movie play, it ends, the lights go on, and people are completely unsure," he says, beaming with pride. "They don't know what to think. And I'm like: 'That's OK. This movie doesn't give you that tragic finale so common in the Holocaust genre. That's because it's as much about us, the viewers, as it is about Germany or the Germans.' "

Mortensen gets a kick out of this. He likes the way the movie tricks us, and asks us what we would have done, and at what point we would have said no to the Nazi war machine. He also likes the tricks that the movie plays with his image, how people expect a square-jawed hero on screen, and how shocked they are to find Middle Earth's unswerving Aragorn as a dithering Nazi puppet. "People have expectations of me, I suspect," he says. "And here those expectations are, um, subverted."

He adds that he could have gone the clean-cut billion-dollar blockbuster route. "I was offered some of them after Lord of the Rings," he says. But they were often "complete crap, all about product placement and marketing". Yes, but what about the juicy cheques? "I don't need the money," he says, slipping once again into swansong mode. "I only want enough money to live and to travel, to send my kid to school [his 20-year-old son Henry is at Columbia University in New York] and to contribute to society."

He says that, anyway, movies should be viewed as art and that he's an artist and that his many photographic exhibitions, his paintings, his poetry and his music CDs (his most recent album, At All, is a collaboration with the Guns N' Roses guitarist Buckethead), are all ultimately part of the same creative impulse.

I've read some of his poetry, looked at his photographs and listened to his music and it all seems, in the nicest way, very melancholic, I tell him. Indeed, in his best movie performances -- think Tom Stall in A History of Violence, or Nikolai in Eastern Promises - his characters seem burdened by profound inner sadness. Is this melancholia part of him? "Maybe," he says, seriously. "Although I like laughing at myself. But I do recognise that part of me." Is it connected to his Danish roots and gloomy Scandinavian heritage? "Maybe," he says again, still serious. "Although that's an easy out, I suppose."

And this urge compulsively to create, how does that relate, exactly, to who you are? He sighs, sits back and, as if beginning anew the fairytale story of Viggo Mortensen, announces softly: "For as long as I can remember, even as a little boy, I used to think it was unfair that someday I was going to die."

The story of Mortensen begins in New York, where he was born, but quickly moves to South America, where he was raised, the eldest of three boys, by his Danish father, also called Viggo, and American mother, Grace. The family remained in Argentina, where Viggo Sr managed a chicken farm, until 1969, when the parents divorced and Viggo Jr moved with his mother and brothers to New York State.

It was around this time that Mortensen began questioning the nature of mortality. "Whose idea was it?" he would ask. "I didn't decide to come to this Earth and I certainly don't want to leave it now that I'm here."

He would eventually conclude "that life was short, and that I was interested in participating". An artist was born.

Henceforth, Mortensen ping-ponged across the Atlantic, between New York and Denmark, working after finishing college as a trucker in Denmark and, later, as a waiter in New York. Which was where, on a whim, he took an acting class at Warren Robertson's Theatre Workshop. There he found his calling, but struggled to find work. "I'd try out for everything and it would always come down to me and some other guy," he says. Crucially, he lost the lead role in Greystoke: The Legend of Tarzan to Christopher Lambert. "Although if I'd gotten Greystoke I probably would've been frustrated," he adds, tacitly acknowledging that it's a bit of a stinker.

Mortensen nonetheless built a solid career as a character actor and a Method hard man. He stayed in character, for instance, as a mute, refusing to speak for the entire four-week shoot of the thriller The Passion of Darkly Noon (1995). Some of these early roles, he explains, "were just me, learning in the trenches, making mistakes on film. I did many movies before anyone asked me to do an interview."

Along the way he married Exene Cervenka, once the singer with the early punk band X and a co-star in his religion-themed comedy Salvation. They had Henry and moved to Los Angeles, but would divorce in 1998. Today, though officially single, Mortensen says that the prospect of getting married again is "not impossible".

The Lord of the Rings movies brought him superstardom. They brought him credibility and commercial clout too, and he quickly landed headlining roles in the adventure romp Hidalgo, the western Appaloosa and the Russian mobster drama Eastern Promises. The latter's thrilling nude bathhouse punch-up epitomises the modern Mortensen -- the fearlessness of a character actor combined with a leading man's physique. Other Hollywood actors, he claims, would have flinched from doing that scene, "unless they were presented in, how can I say, a more 'flattering' fashion".

He is referring, it seems, to the undignified depiction of his genitalia therein, seen flipping and flapping through the air (not exactly the sword of Aragorn), as he is thrown from pillar to post. "It was cold, uncomfortable and violent," he says. "This was not about vanity."

The Mortensen movie star story ends, it seems, here in this room, although there is still one movie left to release, an adaptation of Cormac McCarthy's apocalyptic novel The Road, which was shot before his self-imposed exile. He says that, of course, life goes on, and that he's a busy man. As well as a new collection of published poems, called Songs of Winter, there is also a Spanish language production of Ariel Dorfman's play Purgatorio that he plans to perform in Madrid this winter. "I haven't done theatre in 20 years," he says. "And that terrifies me more than death."

Ah yes, death. We finish on death and melancholia once more. "I don't like the idea of dying. I'm not terrified of it, but I can see how one can become obsessed by it," he says.

I ask him, half-jokingly, why he hasn't made any comedies. "I don't get offered many," he says. "Because it's something I haven't showed that I can do yet."

Yet? What does 'yet' mean for his retirement plans? He answers enigmatically, says that life is a game that keeps moving and that the rules change even as you're playing it. And then he gives a content little smile that seems to say: Viggo Mortensen, multi-hyphenate movie star, may be abandoning the business, but not for long.
Top of this page
Last edited: 6 April 2009 04:45:45