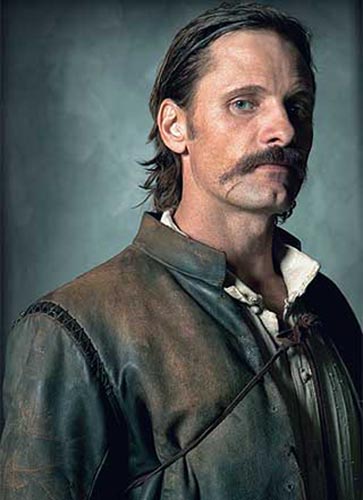 Image César Urrutia.
© 20th Century Fox/Estudios Picasso/Origen ….
In The Lord of the Rings, Aragorn speaks fluent English and Elvish. In Eastern Promises, Nikolai speaks English with a heavy Russian accent. And in Alatriste, which will open Saturday in Japan, Diego Alatriste speaks Spanish the entire time. What do these characters have in common? They are all played by Viggo Mortensen.

"I speak both [English and Spanish]...When I was 11, my mother, my two brothers and I moved to the United States, and I didn't speak Spanish for a long time. But it stayed, so when I started using it again, it was still there. But I learned both of them at the same time when I was little," said the Danish-American, who spent parts of his childhood in Venezuela and Buenos Aires.

In his latest historical adventure, Mortensen plays Captain Alatriste, a fictional Spanish hero who fights imperial wars as a mercenary in the early 17th century -when Spain's power began to wane after its Armada was defeated by England in 1588.

While many of the characters in the film are fictional, the wars that Alatriste fought, as well as the lifestyle of mercenaries of the period and the story-setting -the reign of Philip IV under the influence of the Count-Duke of Olivares - are based on Spanish history. Having some sort of basic understanding will likely make Alatriste more enjoyable to watch.

"It's a part of world history most people don't know so much about. And I thought [it would be] interesting to tell it," Mortensen said.

Mortensen graduated with degrees in politics and Spanish literature, which helped him to understand the fighter and the story's historical background, he said.

"When people think about at the same time period as you had Shakespeare in England, you had [Francisco de] Quevedo [a Spanish poet played by Juan Echanove], and you had [the playwright] Lope de Vega...In a way you had more great writers in Spain at the same time as you had Shakespeare and [Christopher] Marlowe in England," said the actor, who also has authored several books of poetry, photography and painting. "For European writers [and] poets, what people don't think about is that it was maybe the richest culture [in the world] as far as writers, musicians, painters...There was so much happening. I knew a little bit about the literature and I thought it was interesting that we'd get to see this. I like that one of the principal characters is a writer."

In the movie, Quevedo is depicted as Alatriste's friend. Mortensen says the poet-writer plays an important role in forming Alatriste's character.

"The writer is interested in Alatriste as a person. They have something. They complete themselves by being friends with each other," he said.

The story is about how an independent mercenary lived life in Spain. Other events in the life of Alatriste, such as having to become the guardian of the son of a fallen comrade or failing as a lover with a popular actress builds the character, whom Mortensen describes as "not the perfect person, but brave."

To flesh out his character, Mortensen said he imagined Alatriste's childhood - which is not described in the movie - as he always does for any character he portrays. Asked about Alatriste's youth, Mortensen described it as if it was his own.

"He's someone who would have been from the north of Spain, from the mountains. He wasn't the first-born son, so he doesn't get the farm, so he had to go find a job.

"Even though Spain was the big empire of the world, for the people that lived in the countryside, especially up in the north, it was very difficult to make a living. So it was very common for boys when they were maybe 14 years old or something to leave and to go to Leon or go all the way to Madrid. And with someone like Alatriste, when he was 14, he went to Madrid and he got a job helping carry the swords or the equipment of a soldier. He would go in to a battle and hold his things and guns and give them [to him] and carry his food supplies. There were many boys like this that followed these armies. This would be his job and he would learn how to fight, watching and practicing, and then, when he was 15 or 16, he was fighting and probably killed his first man. He's been doing it for maybe 30 years."

The movie is said to be the most expensive domestic film in Spanish history, and won three prizes out of 15 nominations at the Goya Awards, showing, as Mortensen said, that Alatriste is a film of which the people of Spain can be proud.
Top of this page
Last edited: 22 January 2009 14:50:57
© Yomiuri Shimbun.