Another Nazi Film About A Flawed Relationship 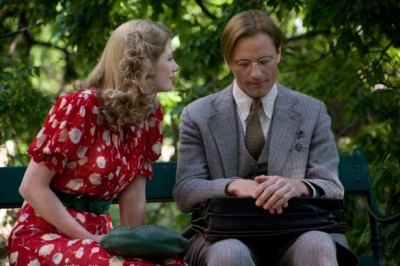 Image Larry Horricks.
© Good Films.
It seems like there've been an unusual spate of Nazi/World War II/Holocaust films in 2008, bundled together at the end of the year in a perhaps too apparent hope for the awards success that often accompanies sad, difficult stories.

We've had The Reader and Defiance, which I've previously reviewed, as well as The Boy in the Striped Pajamas, Valkyrie and now Good.

It's not as if there haven't been such movies before, but it just seems like they're piling up and one wonders if the powers that consider such things might take a better look around the playing field when they schedule their release dates.

Small stories with medium level stars such as Viggo Mortensen run the risk of being overwhelmed by similar subject matter starring Kate Winslet, Tom Cruise or Daniel Craig, the latest James Bond. And Good is a small story that takes a look at a side of Nazi Germany not oft displayed. What happens to relationships - strong relationships - between those of Aryan blood and the Jewish faith?

That's the thread running through Good, with a screenplay by John Wrathall based on the stage play by C. P. Taylor. It's an uneven but often riveting plot about the personal and professional life of John Halder, a soft-spoken academician played by Mortensen. He's in a difficult marriage with Helen, a hyperactive wife performed to the hilt by Anastasia Hille, and after a day at the university it is he who needs to tend to the children while she plays the piano incessantly. Added to his burdens, he must care for his very ill mother, whose dementia is portrayed brilliantly by Gemma Jones. So, naturally he seeks the comfort and psychoanalysis of his friend Maurice, played to earnest effect by Jason Isaacs, a Jew who refuses to believe that Hitler's rise is any more than a brief phase.

The film is partially told in flashback as we meet Halder in the late 1930's when he is summoned to the Reichstag to discuss a novel he wrote four years before about euthanizing a loved one. It seems the Fuehrer loved it and wants him to write a paper about it that can be widely disseminated. There's talk of a movie and he suddenly is thrust into higher political social circles. Only one rub, why hasn't he joined the Nazi party? He mumbles an effective excuse and then joins, which horrifies Maurice, and their relationship begins to abate.

Good is about the guilt of trying to do the right thing, whether about his crumbling family, which he escapes after being seduced by Anne, a young beautiful student imbued with great neurotic form by Jodie Whittaker. It's about the frustration of Maurice stubbornly defying logic when John suggests that he go abroad to wait out the craziness enveloping Germany until it is almost too late and Maurice finally asks his help to get out of the country. Whether John is able to overcome his fears to do so and the accompanying risks nag at his heart.

In and out of each dilemma we go, as director Vicente Amorim takes us on a dizzying roller coaster ride back and forth in time, what to do about his worsening mother until we are confronted with the horror known as Krystalnacht when the Nazis went quite a bit further than mere contempt and discrimination aimed at the Jews. Throughout the ensuing horrors rounding up the Jews, we are tortured along with John at his predicament, his responsibilities to his family, his friend and himself. How Mortensen deals with John's quandary and some of the struggles are marvelous to watch. A tightly controlled man wanting so much to scream his outrage but dares not do so for fear of the consequences. At other times the narrative is almost too surreal or melodramatic and our attention wavers to our personal thoughts.

On the whole Good's title is almost a come-on to a reviewer, and while I cannot succumb to it totally I have to admit it almost is. Because, apart from seeing the sort of World War II things we have already witnessed this year and in many other films, there is an honesty and freshness in John's relationship with Maurice, which keeps the tattering fabric from shredding. This film hasn't a prayer of making any money but if you don't care about only seeing what's in vogue you won't go away feeling unmoved. Good makes us look into our own souls, and if we are honest with ourselves it may depress us. Do you dare?
Top of this page
Last edited: 8 January 2009 11:28:27