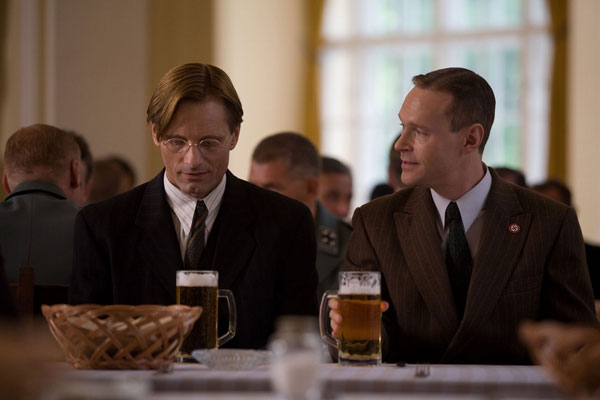 Image Larry Horricks.
© Good Films.
Midway through Austro-Brazilian director Vicente Amorim's fascist parable Good, as student radicals burn books in his university's courtyard, Professor John Halder half-jokingly scoffs at his own literary ambitions, fearing that his novel-writing effort is merely "adding to the pile." Halder, a professor of literature in 1930s Germany, can't so much as get through a Proust lecture without the interruption of loud Nazi rallies outside the classroom (or indeed censures from the dean for teaching a Frenchman).

But Halder is as yet unable to see the irony in his complaint: frustrated at his literary impotence, pondering what lasting contribution he might make to the world of art, he ignores the dangers of what's going on around him. Crucially, he fails to foresee that books are not the only things that his countrymen will be piling in mounds and incinerating.

Sympathy for the devil is a common theme in the recent crop of Nazi and Holocaust films, with Kate Winslet and Tom Cruise both imbuing varying degrees of good will in their goose-stepping characters. In Good, Viggo Mortensen plays convincingly against type as the passive, bookish Halder, the kind of a spineless, floppy-haired and soft-spoken character once reserved for Julian Sands. (Halder is no hunk - a glimpse of his chiseled torso is a rather anomalous feature of his physique.) Trapped in a loveless marriage, saddled with the responsibility of caring for his elderly, doddering mum, the Professor is as flattered by both the sexual advances of a young student and the compliments the National-Socialist Party pays to his writing. With only the slightest hint of self-doubt, he concedes to both offers, skipping out on his family and becoming an honorary officer of the Schutzstaffel.

This "if you can't beat them, join them" approach in both love and politics seems to jumpstart Halder's social life and career - he shacks up with his new "Rhine maiden"-like girlfriend, and Dr. Goebbels turns one of his novels (which happens to be about euthanasia) into a movie. But things are nonetheless a little askew: he's prone to spontaneous aural hallucinations, hearing Mahler songs from the mouths of people on the street; and relations with his best-friend and WWI army buddy, Maurice, become increasingly strained. Played vociferously by the excellent Jason Isaacs (who's best known for his performance as Lucius Malfoy in the Harry Potter films, here without the pretty hair), Maurice is a Jew, and where once both friends could share a few beers and lob a few barbs at Hitler, times have changed. As Maurice puts it, with something of an awkward anachronism: "I'm a Jew; you're a Nazi. End of story."

Halder and Maurice's dialogues, which serve to allegorize the moral ambiguities of the time and setting, provide a sturdy structure for Good's portrait of Halder's deterioration, but they also point up the film's stage origins. Based on a work by British playwright Cecil Philip Taylor (no, not that Cecil Taylor), Amorim's film bears a superficial resemblance to Bertolucci's The Conformist and De Sica's The Garden of the Finzi-Continis, with their sense of dreary complacency, oppressively museum-like spaces, and curiously drab natural settings. But ultimately Good is less evocative and more coldly dialectic than those films. The acting is strong (if generally a bit too English to seem convincingly German), and its isolated touches of surrealism (like the Dennis Potter-esque scenes of Mahler karaoke) are effective, but the sum of these parts amounts to a lesson in complacency and self-interest that's apparent from the start.
Top of this page
Last edited: 7 January 2009 04:16:36