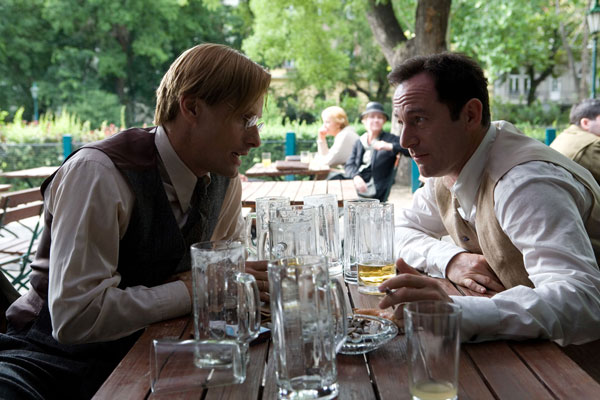 Image Larry Horricks.
© Good Films.
Vicente Amorim's Good is one of a number of fictionalizations that are now coming after years of Holocaust documentaries. Considered among the "100 Best Plays of the Century," C.P. Taylor's 1981 social stagework is more celebrated in the U.K. than here and, employing spontaneous song and soliloquies, was a challenge for screenwriter John Wrathall.

The concern is more with individual conscience set against opportunistic falling into line than with specific time-and-place National Socialism per se. The late thirties trappings of Germany and, briefly, its camps, are cleaned-up stylized and, not spouting ersatz Teutonic accents, the characters unabashedly British, the better to underline a timeless and universal ethical conundrum: at what moment does one stand up for human justice at the cost of personal convenience and even advantage? That historical hindsight precludes any surprise for audiences. Though jumping around in its time span, the plot itself points to an inescapable dénouement, so interest centers not on what but how and when?

Appropriately slight, thin-faced, and physically shortsighted from study, university professor John Halder (Viggo Mortensen) is a Caspar Milquetoast in an Aryan Reich that preaches physical prowess. Rushing all over at home, from upstairs to his bewildered, suicidal, tubercular mother (Gemma Jones) to the kitchen for chaotic cooking with his children, he juggles in aloof patience towards slovenly neurasthenic wife Helen (Anastasia Hille), who plays incessant Mahler on the piano. Bourgeois father-in-law Theodor Brunau (Ralph Riach) advocates Party membership, as does literature department head Mandelstam (David de Keyser) at the university, where Halder passively observes a book burning and retreats into his office to write novels.

So mild is he in this state which encourages procreation for racial purity, that when he finally succumbs to the undisguised come-on of blonde "Rhine maiden" student Anne Hartmann (Jodie Whittaker), he is unable to perform the first time. The only outlet for this timid academic is Maurice Israel Gluckstein (Jason Isaacs), a randy psychoanalyst friend since they shared trenches at 1918's Dieppe front. Citizens and veterans both, they ignore writing on the wall and joke about the Great War Lance Corporal become der Führer.

That "Führer himself has examined your work" on fictional euthanasia, Halder is informed when called before censor Bouhler (Mark Strong) in the spring of '37 and asked to do propaganda papers for the régime. The writer's subsequent swift rise within officialdom is not fully convincing even among the implausible ascent to power of actual historical misfits of the times. The idea, however, is not the promotion of a specific individual but the decisions of conscience, or the acquiescence in others', that he allows himself to adopt. Not like the unknowing Mr. Chance of Being There, but consciously pulled by the influence and fame that has Dr. Goebbels (Adrian Schiller) drop compliments on the set of an approved movie being made from his novel, the meek professor cooperates at each stage without consideration of where this is leading him.

Aphrodisiac fame cements mistress, soon wife, Annie to him and even causes discarded Helen to confess spousal shortcomings and plead for reconciliation.

Jew-baiting and racial laws at last get through to Maurice, and, though the times and the two's opposite trajectories strain friendship, the bitter analyst humbles himself to ask for an exit visa to Paris. Those who have seized the opportunity and the moment, however, cannot control either, when an assassination in the French capital is milked by the very propaganda machine that Halder has at once used and been used by. Called up and looking frail in an officer's uniform, the hero is sickened to discover what has been right in front of his nose.

One of few admitting itself "a story with a message," Good exhibits the single-minded approach of most such works, an effect increased by the necessary concentration of stage origins. In memoriam to Scottish playwright Taylor, who dwelt on idealism in the face of corruption, and to producer Miriam Segal's "devoted to the betterment of the world" father Ronald, the film bares its heart on its sleeve way prior to such closing dedications. Fable and allegory have often served to urge tolerance and mercy, so why not today, too, on the screen?
Top of this page
Last edited: 5 January 2009 15:19:24