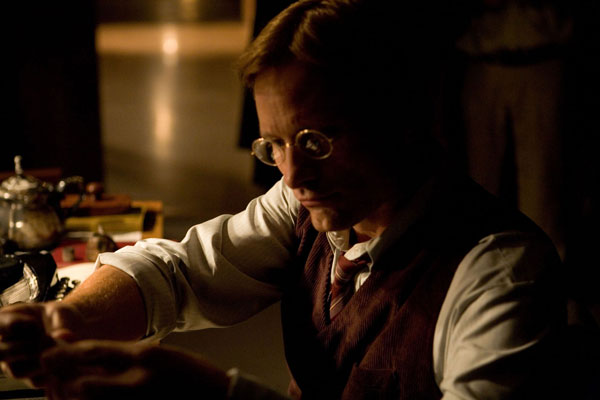 Image Larry Horricks.
© Good Films.
If a theme has emerged among this season's (however unlikely) Oscar bait, it could be a sympathetic look from inside the Nazi regime. Whereas Valkyrie finds heroism there, and The Reader a sort of unapologetic ignorance, the allegorical Good lies somewhere in between, as German literature professor John Halder (Viggo Mortensen, conveying chaos by lurching about) transforms from an unassuming intellectual to a Gestapo agent.

The compromises are minor at first: He agrees to write a paper. Joins the party. Assumes an "honorary" post. Meanwhile, he takes a lover. Gets promoted. Moves into a swank, furnished house. Suddenly, the camera deftly pulls back to reveal Halder in full SS uniform, his lovely, pregnant new wife on her knees in front of him. The familiar explanations are here - that the erosion of rights was gradual, that the people were captivated by the rhetoric and overlooked the appalling message. But the compelling argument is that Halder is so overwhelmed by the chaos in his life - a distant ex-wife, a meddling father-in-law, a senile mother - that he fails to act until it's too late. The consequences become personal, when his best friend (Jason Isaacs) disappears.

Based on C.P. Taylor's esteemed play, Vicente Amorim's film maintains some of the original's nonlinear structure, but it's applied so sparingly as to be ultimately unnecessary. The restrained use of magical realism, however, culminates nicely in Halder's climactic realization, even if hindsight lessens the impact on an audience all too familiar with the events.
Top of this page
Last edited: 5 January 2009 06:58:25