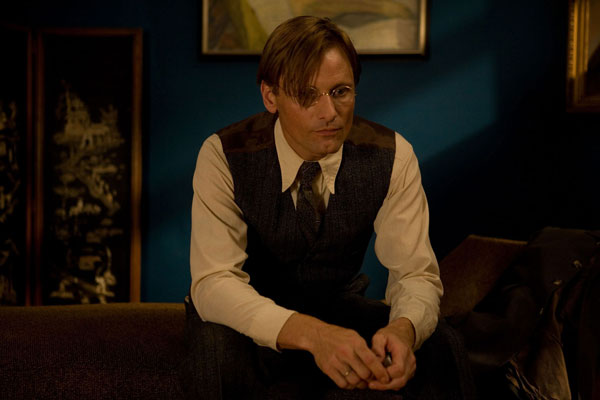 Image Larry Horricks.
© Good Films.
Vicente Amorim's Good is a masterful achievement, both as a drama and as a symbolic cautionary tale. As a drama set in the early to middle Nazi era in Germany, and steeped in one man's self-destructive adaptation to the morally compromised atmosphere of that time, it's an intensely serious film, and also a very moving one, touching all of the right emotional buttons at just the right moments in its depiction of the destruction of a country, a people, and a character. Adapted by screenwriter John Wrathall from C.P. Taylor's 1981 play of the same name, in Amorim's hands, Good expands the play to full cinematic dimensions without doing any violence to its content or meaning.

Oddly enough, the film is, in many respects, the perfect companion piece to Istvan Szabo's Taking Sides (2001, itself an adaptation of a Ronald Harwood play), which dealt with the compromises made by a renowned artist (conductor Wilhelm Furtwangler), conscious and unconscious, with the Nazis during Hitler's rule - except that instead of being a post-mortem (almost an inquest) on a career, Good is more immediately dramatic and, indeed, downright spellbinding, thanks both to its structure and also to an engrossing performance by Viggo Mortensen as Professor John Halder, the man at the center of the drama. Mortensen brings a high level of accessible humanity, in all of its casual flaws, to the character of Halder, which enables audiences to brush up very close to the moral (and ultimately personal) destruction entailed in his efforts at adapting to the Nazis' rule over Germany. In the process, the movie also makes a much broader cautionary statement about the ways in which well-meaning, humane, compassionate, and educated people - or a people, or a country - can inch their way to moral and personal oblivion.

Mortensen is never less than note-perfect as Halder, as he descends from harried, over-extended family man - near his wit's end in terms of responsibilities to his wife, children, and mother, even as the Nazis take power and threaten his future as a teacher - to academic philanderer, carrying on an affair with a student; to silent collaborator with the Hitler regime; and finally to uniformed representative of the SS. The film's success hinges on Mortensen successfully pulling off the portrayal of an intelligent, sensitive man who is confronted first by forces whose seriousness he doesn't fully appreciate; and then allows himself, out of vanity, or a deluded desire to try and inject some of his perceived good intentions into an evil process, to be thrust into roles - medical and technical - as an SS official, that, as a literature professor (a title he claims to prefer, even in his uniform), he is utterly incapable of fulfilling, except to abhor on a moral level. And he fails himself in the latter capacity until the denouement, when, at Auschwitz in 1942, he gets a full look at the end of the road that he started down with the Nazis in 1933. In that regard, Mortensen's Halder is a fictional stand-in for the educated German and, especially, the German academics who were too sophisticated to support Hitler or the Nazis, or vote for either, but found themselves willing to try and make the best of their rule, believing that it wouldn't last.

Amorim has successfully evoked the story's time and setting, and characters - including several historical figures - without spending huge sums of money, in a way that still demands to be seen on the big screen. He also brings off the sequences depicting Halder's music-centered hallucinations (built on the works of Gustav Mahler) in sufficiently low-key manner as to be as startling in their sudden appearances to us as they seem to Halder. As most of the movie is set before the actual outbreak of the Second World War, there is no direct depiction of any external events - a key moment comes up near the end with the aftermath of the Vom Rath shooting (which led, four days later, to Kristallnacht, which is depicted successfully in microcosm). But everything is seen from the point-of-view of one character, whose experiences are all pulled together at the denouement, like a thread suddenly yanked so that Halder's thin layer of fantasy, hinting at his own rejection of his rationalizations, suddenly presses up against reality, and the two layers merge into one horrific whole.

There are other characters worth noting, whose presence and portrayals help drive this piece. Jason Isaacs is a match for Mortensen as Halder's best friend, a Jewish psychiatrist (and World War I veteran), whose stubbornness and pride lead him down a path to destruction even more final than Halder's. It is one of the points that the script fails to address fully, as to the full motivations for this character - as one unsympathetic onlooker observes, Jews with any sense left Germany ages ago. Jodie Whittaker is also impressive as the woman whose arrival in his life heralds the beginning of Halder's compromises, with his marriage and then all of his morals.

The original music by Simon Lacey, which is kept to a relative minimum across the picture, meshes well with the Mahler quotations. In addition, the cinematography by Andrew Dunn is first-rate, and - despite the unpleasantness of some of the images and the story - beautiful to look at in its quietly seductive way in almost every corner of the screen. He and Amorim simply work around anything that would break the period spell, and create a very successful illusion without having to engage in Steven Spielberg-scale production. They also prove, in the bargain, that less can sometimes be more.

Other virtues include the performances of Anastasia Hille, who doesn't get as much screen time as one would wish as Halder's loyal first wife; and Gemma Jones, who steals every scene that she is in as his chronically ill mother. And Steven Mackintosh and Mark Strong give highly successful, low-key performances - their characters seeming all the more evil for their sheer casualness - as two of the more dedicated Nazis around Halder. Although it was a BBC co-production, with the small-screen as its eventual destination, Good is one to definitely see in a theater, and perhaps more than once - it's got that much to offer.