Hero Of The Hour

Source: Sydney Morning Herald
How on Middle Earth did a hairy, often barefoot, splatter-flick maker from New Zealand pull off the trilogy of a lifetime 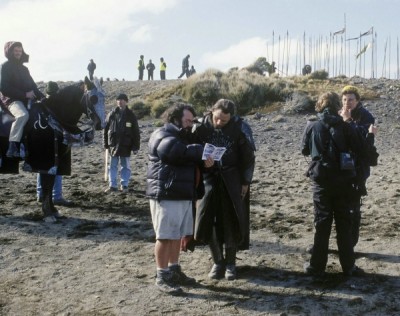 © New Line Productions Inc.
Witnessing what Peter Jackson calls "all the palaver" surrounding the world premiere of The Lord of the Rings: The Return of the King in Wellington - fans screaming outside the cast's hotel, a parliamentary reception and a street parade attended by 100,000 enthusiastic New Zealanders - it's easy to forget his humble start on the trilogy. If the director was known at all before tackling Tolkein's sprawling fantasy novel, it was for some modest horror films and one drama.
Meet the Feebles, Braindead, The Frighteners and Heavenly Creatures had been cult but not commercial successes. How Jackson managed to make three films costing a reputed $US330 million ($446 million) - employing up to 2400 people at the height of production and accumulating a studio, post-production facilities, film lab and visual and digital effects companies along the way - is a tribute to his commitment and creative imagination.

For seven years the quietly spoken Jackson demonstrated the same inner resolve as the heroic Frodo on his trek to destroy the corrupting ring. He has pulled off one of the greatest filmmaking gambles of all time. In the process, he has become one of the world's most successful directors.

"I've reached the point as a filmmaker that is the most valuable thing that you could ever dream about," he says without vanity. "I know, as of today at least, I could probably make anything that I wanted to make.

"Obviously as soon as you have a flop, you're back to square one. It's pretty brutal out there. But it's a good feeling because every film I've made up to Lord of the Rings has been a struggle to get made."

In his home city, the 42-year-old is the most unassuming celebrity you could imagine. Behind round glasses, he looks like a maths brain, comic book fanatic or one of his beloved hobbits, and is famous for constantly wearing shorts and going barefoot.

He shot the three films simultaneously, more than nine hours of epic drama, and each one has added to the achievement.

The final chapter, The Return of the King, is a worthy sequel to The Fellowship of the Ring and The Two Towers, which have earned $US1.8 billion at the box office and won six Oscars from 19 nominations. In a year of strong dramas, it has to be a leading contender for the best picture and direction Oscars next year.

Signs in the premiere crowd saying "Jackson for PM" and "Peter, you're our homeboy" were examples of the affection fellow Kiwis have for the director. Actor John Rhys-Davies, who plays the dwarf Gimli, called on the New Zealand Government to knight Jackson for "a definitively great series of pictures".

Orlando Bloom, who plays Legolas, was not quite so articulate in expressing his admiration: "He's a f---ing genius."

The trilogy grew out of Jackson's interest in finding a film that could use the new computer-generated effects he was using on The Frighteners. "I thought a fantasy film would be great. Nobody was using CG, really, for the old Sinbad and Jason and the Argonauts type stuff. Then Lord of the Rings popped in my mind."

His plan for a two-film adaptation was almost dead in mid-1998. The Hollywood studio Miramax, troubled by the $US140 million cost, gave Jackson four weeks to find another studio or it would make just one film with another director. Using $50,000 of his own money, Jackson made a 35-minute pitch tape that went to eight studios. Only New Line was interested.

Then something happened right out of a Hollywood fable. The studio's co-chief executive, Bob Shaye, saw the pitch and, according to The New York Times, asked Jackson, "Aren't there three books?"

"Why are you making two films? Why not three?"

New Line secured the film rights, put up $US80 million and raised $US200 million from its international distribution partners. Jackson was away.

"Quite early on, I thought Peter was a little bit crackers to take this on," says Sir Ian McKellen, who plays Gandalf.

The huge shoot involved seven separate units at one stage. "On a practical level, this shoot was so ambitious," says Viggo Mortensen who plays Aragorn. "He knew it would be from the beginning and it became even more so over time. He simply couldn't be there all the time. So you were on your own to keep track of where you were in the story and adapt to the constant rewrites and changes of plan and changes of weather."

Everyone learnt new levels of patience during filming. "It certainly wasn't a sprint," Mortensen says. "You couldn't see the light at the end of the tunnel for a long, long time. You sort of got used to that, which is the best way to be - just to concentrate on what you were doing that day rather than 'I'll be done in two weeks'."

The actors who committed years to the trilogy have their own views on how Jackson and his writing-producing-and-romantic partner, Fran Walsh, carried it off.

"He's not a tyrant and he's not a one-man band," says McKellen. "He casts very well and I don't just mean the actors - I mean the heads of departments - then lets them get on with it. Peter turned out, with his rather reticent modest determination, to be the right person for the job."

"He had this wonderfully easygoing, yet very focused, laser-like precision about what he was working on."

Jackson says he wanted to cast "nice people" because he knew how long they'd be working together. And it's clear he is a much-liked character as well. When the director had Sir Edmund Hillary on set, Astin wished out loud that he had the famous mountaineer's book so he could get it signed. Jackson promptly dispatched a crew member to buy him a copy.

Arriving to play Gimli, Rhys-Davies was also sceptical that Jackson could handle a project of such magnitude. "I didn't fancy spending two years of my life doing a failed first picture and two direct-to-videos, if they were ever completed."

While contemplating quitting the film, Rhys-Davies spent two weeks talking to every department on the film and discovered a surprising level of excellence. When he saw Jackson work with his actors, he was a convert.

"Anyone can make a four-hander in six weeks. But you get six months into something like this, and you haven't got your planning and your organisation, and the strength in depth that you need, you're in a world of pain that you'll never get out of."

Andy Serkis, who plays Gollum, says Jackson gets such strong performances because he trusts actors. "He understands the true nature of storytelling in filmmaking, in that you've got to have characters that you feel for, empathise with and want to be around. He very cleverly has this huge canvas and then can zoom in at high speed into these very tight vignettes of human emotion."

"He's not a yeller," agrees co-writer Philippa Boyens. "He's very low key ... People feel secure. You can make mistakes and he admits his own mistakes. So he generates an atmosphere - it's the same with the writing - of being able to find it. Just work your way into it and find it."

So how has the trilogy changed Jackson's life?

"To be honest with you, I haven't really had a life," he says. "I've just been a working filmmaker desperately trying to get these films finished for the last few years."

Next year, Jackson will use that freedom to remake King Kong starring Naomi Watts. But first he has to finish the DVD cut of The Return of the King, which is likely to be 20 to 30 minutes longer than the 202-minute cinema version.

He has also expressed an interest in directing The Hobbit if New Line can secure the rights.

"I'm sure they'd be quite keen to do it and I'd be happy to talk to them about it because it would be fun to finish it all off," he says.