"If you're not afraid of playing a character, there is no challenge"

By Mercedes Jansa - translated by Chrissie 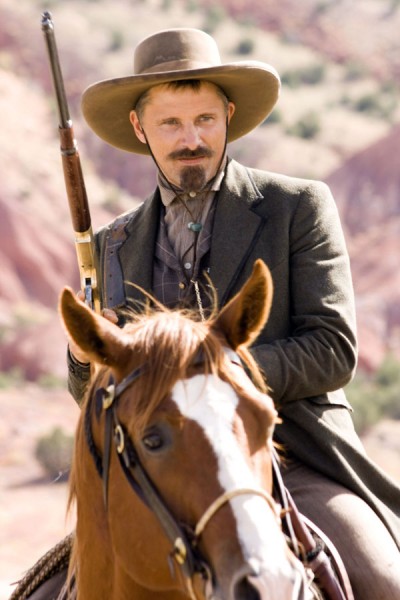 © New Line Cinema/Warner Brothers.
Since you are giving out San Lorenzo stickers, before we talk about movies, what do you think about Maradona as coach of the (Argentina) national team?

It's going to be a mess. The referees are going to kick him out of the match as soon as it starts. But it's a very good idea. He gets a lot of attention and he knows a lot about soccer. Let's see what happens if he gets bored.

Do you think there is a resurgence in western films?

I grew up with this genre because then there were many films and television series. But more than anything I care about the time in the second half of the 19th century, which forms the border of the West. When one era ended and another one opened. It was no more 'this is mine' and there's 'no law'. The maturity of a nation or a person comes when you realise that there are limits to behaviour, we must adapt to a new situation, to be civilized. And you understand that everything you do has repercussions. Appaloosa is a story of friendship, respect, allowing the other person space, loyalty. Values that are universal and timeless.

Your character and the one interpreted by Ed Harris, who also directed the film, barely maintain a friendship based on words. Is silence the key to a good relationship?

With friends or in the relationships that I value most it is the respect of space for each other. Knowing when to ask a question, or be silent, is important because there are moments when, as a friend, it is necessary to say things as they are. Do not say something that would be like lying. In the film there are several moments where we speak little, but it is well understood.

How did you receive this script?

After working together on A History of Violence, Ed Harris gave me a novel by Robert B. Parker because he wanted to make a movie of it. I read it and I told him I liked the theme of honour and comradeship in the west. He knew I was going to get ready to commit to it, because of my views on the matter. Ed worked hard because he had to act and direct, but we got along with only a few words, like our characters.

Ariadna Gil, with whom you had already worked in Alatriste, has a small role in the film. How do you see it?

I think it is phenomenal. Ed did not have to say much during the shooting because he had an intelligent point of view about his characters that was understood right away. The truth is that working under the direction of Harris gives you confidence.

What does a script need to have for you to choose it?

It must be a story that is more or less well written. Most scripts are not good. If you find something interesting it is better. If both the story and the character are good and you are a bit afraid, it gives you goosebumps, and it feels great. If you do not have a bit of fear about interpreting a character then there is no challenge.

You have just finished shooting The Road, adapted from the novel by Cormac McCarthy. That's a well written story.

It is an interesting story and a hard one. The shooting has also been hard, with a devastated landscape, but with the actors it has gone very well. I think the film will make it easier to understand the woman's decisions, interpreted by Charlize Theron.

What about your other artistic activities?

I've just presented an exhibition in Denmark and soon there's going to be a CD of piano and poetry in Castilian. Lately I have been writing more in Castilian, I don't know why.
Top of this page
Last edited: 30 November 2008 08:22:08
© El Periodico.