Source: Livecity (Italy)
Viggo Mortensen presents a really unique press conference to the viewers of Good, one of the best movies in competition at this third edition of the Rome Film Festival.

He arrives dressed in casual clothes, with the usual backpack and the beloved flag he wraps himself in to pose for photographers whenever he can, and answers the questions of the audience in a sublime, almost hypnotizing, way. 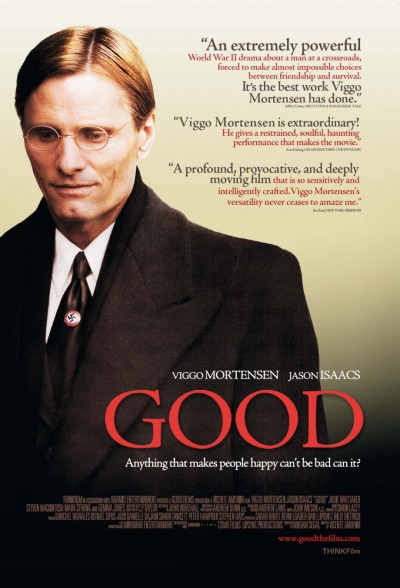 © Odd Lot Entertainment, LLC.
Besides being an actor, you are also a musician, a painter and a photographer. Which art do you think you mostly belong to? And would you like to make a movie for teenagers?

I can't answer this question. I don't know, it's the same thing. It is always art. I can't pull the things apart, they go together. Of course being an actor allows me to take a wide and deep look at the world.

About the second part of the question, honestly I do movies for myself, to learn something.

A very powerful scene in Good is the one where your character wears the Nazi uniform for the first time. How did you feel about it?

It was interesting because some years ago, while working in a play, I had to wear a similar uniform, but now I can't remember how I managed it in those days.

The first time I wore the Nazi uniform I couldn't think what it meant, because it was a very warm summer day, and it was so hard and heavy. Everything went wrong, so I focused myself on trying to solve these problems. It was only later that I realised what it meant. The main purpose of this movie though is to not only show the horror of the Germans in that period, under Hitler, it is the story of a man in the face of his own life, the story of a family man and a great friendship.

It's not a movie about Nazism or the Jews. It deals with people's behaviour in certain events, in any place at any time, in Italy, such as in Germany or in any other country.

In the movie the main character writes a novel where he speaks about euthanasia, so he is recruited by the regime as a possible ally in the Nazi propaganda. What do you think about this subject?

This is a burning topical subject, and I have to say that it's not an easy thing to answer. Essentially though, I think that people should have the freedom and the right to decide whether to keep suffering a non-dignified life or not.

We can see that in Germany, in those days, there were people who really didn't know what was happening, like the main character of this movie. Is that really the message of this movie?

I think that for all governments, whatever their Constitution says, the primary goal is to survive. It has always been this way and it will be forever. It is up to citizens to demand better government. It's up to any individual. The best way is to try to keep people together by not making distinctions about sex, age, religion, etc.

What happened in Germany with the Holocaust is not over, even today there are many situations of this kind, as in Africa for example, and it is up to all of us to face this distressing reality.

The purpose of the movie is not to say "Look at those Germans! They were crazy!" but to tell the story of a man and his little big choices.

You are also in the forthcoming movie The Road, where the events are set in a fictional apocalyptic background, which is the opposite to the background of Good, which is very real.

It's true. Both the movies remind you and show certain risks that society can run, and this is always a good thing. In both the movies my characters have to perform daily actions in order to survive. The main character of Good is busy with what happens to him in everyday life: work, family, things like that. He doesn't see the consequences that his actions can have in the future.
Top of this page
Last edited: 29 November 2008 14:12:52
© Livecity.it.