By Marcelo Hessel - translated by Graciela

Source: Omelete (Brazil)
The movie directed by Vicente Amorim deals with the Holocaust in a respectful way 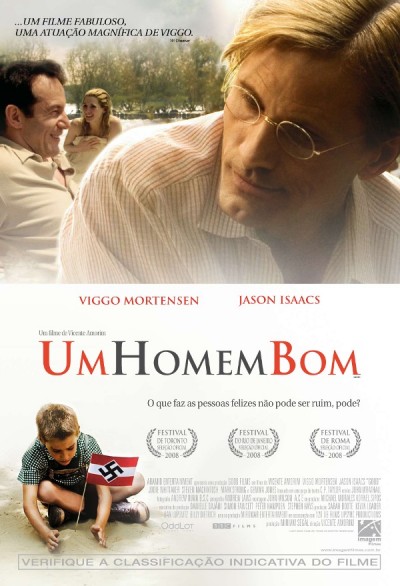 Poster (Brazil).
© Odd Lot Entertainment, LLC.
Based on the play by the Scottish author Cecil Philip Taylor (1929-1981), the drama A Good Man (Good, 2008) accompanies literature professor John Halder, the "good man" from the title of the movie, a family man with a problematic wife, an intrusive father in law and an ill mother. The fact that Halder has written a fictional romance defending euthanasia would not have had any more dramatic consequences if it were not the year 1933 in Berlin. Hitler is on the rise, and Halder's words take a totally distorted meaning.

It has been claimed that Germans in general were unaware of the Jewish genocide taking place in Nazi concentration camps. Professor Halder, interpreted by Viggo Mortensen (Eastern Promises) in the movie directed by Vicente Amorim (The Middle of Nowhere), is one of them.

At some point during the story, one of Halder's students questions, in front of a Nazi demonstration filled with enthusiastic civilians, if "something that makes people so happy can be bad". That is the issue at the heart of A Good Man and also the key to understanding Hitler's ascension to power - a regime that at the beginning of the movie, well before World War II, Halder bet "would not last".

The economic chaos after World War I is the main reason why the Germans saw Hitler as a savior. Halder's house in the movie is, in a general way, a metonymy of Germany: plenty of vegetable stews for lunch and dinner, a clear image of those times of recession. Amorim makes it very clear from those scenes: Halder's house is always very dark, depressive and oppressive, whereas the main interactions between the professor and the student mentioned before take place in open spaces, with plenty of light.

Only in the party ballrooms there is more light than in the open spaces, which, without revealing much of the story, hints at the path that the good man chooses for himself.

The question of how he uses light in different scenes is one of the ways which Brazilian director (or should we say "world director", since the son of the then diplomat and now minister Celso Amorim learned to be cosmopolitan from a very young age) chooses to make his movie didactic. Text, like the discussions between the professor and his student, or between the professor and his colleague, the Jewish psychoanalyst, are another way. Movies for the masses have that.

Therefore, A Good Man falls into the category of the respectful films about the Holocaust that Hollywood produces every now and then: with a faultless set design, great acting, with some artistic moments like the final shot/sequence, and putting the humanist message first.
Top of this page
Last edited: 21 November 2008 15:40:49