Viggo Wants To Live On Samsø

By Kim Kastrup - translated by Estel

Source: Ekstra Bladet
Viggo Mortensen exhibits his photographs in Roskilde but if he lived in Denmark it would be on Samsø. 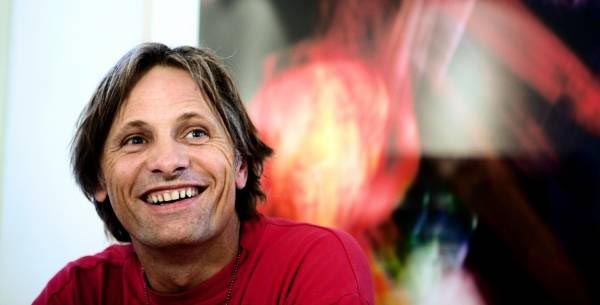 Sådanset Art Exhibition - Roskilde, Denmark …
Image Jakob Jørgensen.
© Ekstra Bladet.
There's no doubt about it, Danish-American world star Viggo Mortensen's heart beats for Denmark. He proved it once more when this afternoon he presented his photographs at an exhibition at Palæfløjen in Roskilde, dressed in an old, red soccer jersey that the Danish national soccer team used in 1960, when the team won a silver at the Olympic Games in Rome.

Amongst the more than 190 pictures from all over the world that Viggo is showing, there are many Danish themes, including the railway station at Odense and from the Mid-Zealand landscape around Jystrup, where both his Aunt Tulle and Uncle Henry have lived. There is, for example, a picture of a bird in flight over a forest island that Viggo simply calls Midtsjælland.

And to us Danes it is in itself an honour, that Viggo chooses to be in Denmark these days, because on Monday he turns 50.

"I will celebrate my birthday with my family, while I'm here in Denmark, but on my actual birthday I will go to a far away place where I can be completely alone and meditate a little on my life. I think that is a birthday gift I deserve," says Viggo Mortensen.

Peace and quiet on Samsø

It's no secret that you're crazy about Denmark. Could you ever consider settling down here in Denmark to live?

"Yes, I might but it would be on Samsø. There you are still allowed to walk around in peace, especially in winter. If they don't build that dreadful bridge to Samsø, that they might build. I am very much opposed to that bridge," says Viggo Mortensen.

What is it that fascinates you about Denmark?

"It is a country where I feel at home. I have lots of family here and I feel safe here in Mid-Zealand. But I have also visited Denmark without visiting my family, when I have enjoyed being in Copenhagen, Jutland or on Samsø," says Viggo Mortensen.

How do you feel about soon turning that corner and becoming 50?

"All things are going a little slower than when I was young. I need to sleep more. I can't run as fast and I'm surprised when I become ill," says Viggo, adding: "But I am extremely happy about life. I have many friends and I have a big family that I love, also here in Denmark. I have through my work gained the opportunity to travel around the entire world where I, for example, can take good pictures. I love travelling," Viggo says and stresses that he through his travels has learnt to feel at home in many places in the world.

Viggo also thinks that through travelling you naturally become an opponent of war, because you get a more nuanced picture of the whole world and its cultures.

"I would like to use this opportunity to say that I think it is a huge mistake that Anders Fogh Rasmussen and his government have led Denmark into war in Iraq and Afghanistan. It is totally stupid and idiotic. And I'm sure 90 percent of Danes agree," says Viggo Mortensen.

At Viggo Mortensen's photo exhibition in Roskilde there are landscapes and nature pictures from, among others, New Zealand, Argentina, Morocco, Iceland, the US and Denmark. And all images are linked by a so called line that ties the pictures together.

"There are images of forests, mountains and animals. Everything is connected. We are related to the animals and we are also in a way animals ourselves. When I see my own pictures, it's like seeing a movie. It is, for example a single moment in a film scene that you remember. That's also the case with my pictures. I remember the places I've been to and can go there again through the pictures," says Viggo.

But for Viggo life is more than art. He is deeply fascinated by soccer and reveals to Ekstra Bladet that he might travel to Argentina in November to see a game with his favorite team San Lorenzo.

"And I could also consider coming back to Denmark in the Spring to see the Danish national soccer team against Albania."