Source: Los Angeles Times
The actor, who stars in Good, a film adaptation of a play he saw more than 25 years ago about 1930s Germany, sees parallels between the movie plot, the real world in 1982 and the world now. 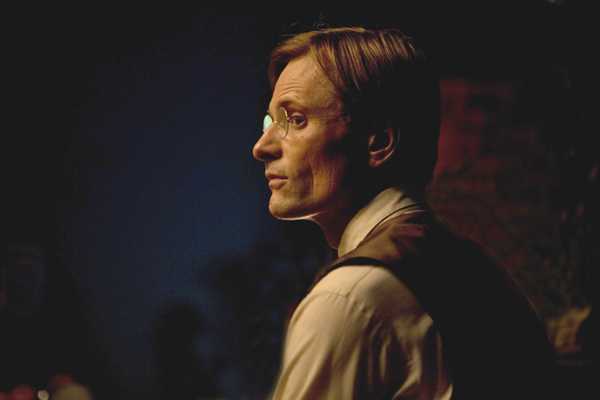 Image Larry Horricks.
© Good Films.
Viggo Mortensen doesn't need prompting to talk about the modern resonance of Good, the film adaptation of C.P. Taylor's play about an ordinary man in 1930s Germany being slowly co-opted by the Nazis.

"I made the leap immediately from what would I have done if I were Prof. John Halder, to what am I doing now, in my time?" he says by phone from Denmark. "When I saw it in 1982, [Margaret] Thatcher was prime minister and [Ronald] Reagan was president. But certain things were the same as now: the politics of war, misinformation, pressure on the citizenry to go along with certain measures from the legislative arms of this country - some things don't change.

"I guess the main thing I felt, making the movie, just like I did in watching the play 25 years earlier, was that it's worthwhile paying attention. You don't need to be some kind of bookworm or political activist; little and big decisions that individuals make in society on a daily basis are what any country is."

The easygoing demeanor of this actor-photographer-poet-painter-polyglot and founder of Perceval Press (dedicated to presenting otherwise obscure artistic works) might be deceptive if one didn't listen to the words. He sounds tired, having just flown in from Argentina, where he was promoting his Ed Harris western, Appaloosa, following the enthusiastic reception of Good at the Festival do Rio in Brazil. So he's awfully soft-spoken and measured for someone who is figuratively screaming for citizens to "pay attention!"

"Things that happened, let's say in the United States in the last eight years, maybe if they had to do it again, legislators and citizens, they may not have given up so many things," says the self-identified "proud American" with quiet insistence. "There have been incredible changes in a short period, just as there were then in Germany. If somebody said to you, 'Would you be willing to put up with all these changes to your rights and the legal system,' you'd say, 'Well, no.' But by having it happen little by little, it's like death by a thousand cuts. Pretty soon you're bleeding to death."

Good challenges its audience with a protagonist who, some have told the actor, becomes less sympathetic as he takes baby steps to hell, a reaction Mortensen doesn't mind.

"It's not wrong for you to feel that way. What's interesting is that a lot of people, as they're watching this character, as he's making certain decisions with the knowledge he has at hand, for the reasons he, you know, food on the table, take care of his mother, there's a lot of stress - 'You've got to join the party,' 'Whatever, I've got to take care of my kids right now,' 'You've got to ban Proust this semester,' 'OK, whatever' - these little choices he makes, people kind of identify with the character in a way: 'I can see that, I can see that.' But then they get to a certain point and they go, 'No, no, no, I would never do that!'"

He also stars in the upcoming adaptation of The Road, the Pulitzer Prize-winning novel by No Country for Old Men author Cormac McCarthy. A bleak journey by foot through post-apocalyptic America, Mortensen says, the project came about when he was exhausted and stressed out - so it seemed like just the right thing to do. But now, despite his jet lag, he still musters the energy to drive home the relevance of Good, which opens Dec. 31.

Usually, the bird's-eye view of such films is "'These bad Germans, they're easily led, they're robotic,'" he says. "It allows you a comfortable distance from a period historically and a group of people in a country who did things. I think you feel, watching Good, this is not really just a German problem.

"To not speak up about something in your relationship, in your family, in your town, at work; to not speak out about something you know in your heart, from the information you have, may be wrong or problematic, is complicity."
Top of this page
Last edited: 2 November 2008 15:36:48
© Los Angeles Times.