In The Clothes Of A Nazi

By Gabriele Niola - translated by Ewa 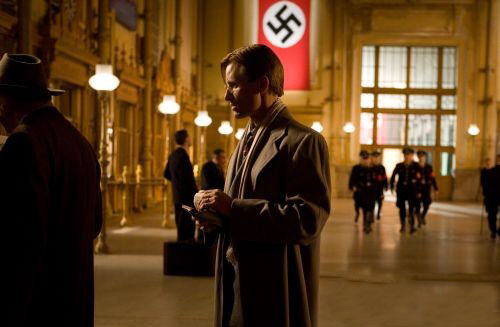 Image Larry Horricks.
© Good Films.
He arrives in a light jacket and a Hungarian soccer shirt. Viggo Mortensen, who's not shy to admit he's a great soccer fan, wherever he goes he takes the flag of his beloved team, the Club Atletico San Lorenzo de Almagro (he fell in love with the Argentine team when he was a child.)

Despite his casual appearance and unconventional look the American actor (who understands Italian perfectly and doesn't need an interpreter) turns serious when it comes to Good. Without any problems he expresses his visions on society, politics, history and what every man needs to fight for day by day.

The film tells the story of a cultured man in Nazi Germany, who, captured by his daily duties, doesn't realize that he is slowly entering into the machine of the party. He does not share the party's ideology but downplays the problem which will explode in an emotional and very intense ending. In particular the issues of today's humanity and the need to observe our own governments interested Mortensen, who is firmly convinced of the intrinsically deceptive nature of any government, according to him their first goal is to maintain their own role. Therefore a continuous reminder of the true objectives should be the task of the citizens.

It is not the first time that he has interpreted a Nazi. He had already played a part as an SS administrator in a prison camp in a theatrical presentation.

"The first time my only problem was being as credible as possible, now my main worry was not to apply a moral judgment on the character created by my own slight prejudices about Germans of that period." Prejudices one can easily sympathize with, but which, according to the actor, prevent us from fully understanding the events and the reasons why they could have happened; and therefore from understanding the reality of today.

"When I was on the set I realized that I was playing a German and that I did not have to judge him but to play him without comments. The problem with this sort of movie is that they are never told with objectivity but through the lenses of prejudices one can easily have. Good instead is the story of a man and his friend. It's not a movie about Hitler and Nazism; it's about the people living in Germany day by day."

And the movie itself should motivate you to think about our daily life and our role in society: "Making the movie I immediately asked myself what would I have done in the position of my character but then I realized that the real question is what am I doing now? So you become aware of all the things you have to do every day, things that absorb you, you understand that nations and societies are ideas, they are not real. They exist because passports exist, but every geographic area is full of people making decisions on a daily basis and making a country what it is."

Showing not demonstrating is apparently the imperative guideline of the film. Trying to understand how what happened could have happened in Germany in the Thirties and to reflect that it happens every day now in various zones of the world.

Mortensen takes the liberty to illustrate with empathy how much he has got inside his character: "The point is that there are moments in life when you don't want to be corrected because you don't want others to remind you of your errors or your contradictions. My character does not see his Jewish friend for a certain period because that evokes uneasiness. That's why this movie is picking on the moment and not on delaying; otherwise you allow such things to happen."

Here's the bridge to the present: "It's also what happens when people say they will vote for the minor of the evils. In my country after all of the disasters of the first Bush government half of the country re-elected him, it's the same here with Berlusconi. We don't have to complain about things that happen but we have to try to make something. Time goes by and we do not notice the turns that events have taken. If we in the United States in 2000 had foreseen the disasters that have happened now, legislatively, civilly, economically, it would have appeared impossible to us. Something that cannot happen, instead it has happened and happens. If Obama is elected it does not mean that the problem will be resolved, we must ask ourselves every day what is the right thing to do."

And how to do it? According to Viggo Mortensen a possible answer given by Good lies in facing your own contradictions, beginning with those which the movie triggers: "The beauty of Good is that it doesn't want to be neither politically correct or incorrect, nobody judges. In fact many didn't like the movie due to its ending because initially it's easy to identify with the protagonist. When at the end he wears that uniform you remain disgusted. Then the movie doesn't appeal to you because it has made you identify with such a person."
Top of this page
Last edited: 2 November 2008 16:00:37
© MYmovies.it.