Source: Le Figaro: Madame
Celebrated photographer and painter, poet of his time, David Cronenberg's favoured lucky actor has refused to conform to Hollywood stereotypes. He lives in the forest, takes an interest in politics, and plays a cowboy in Ed Harris' Appaloosa. 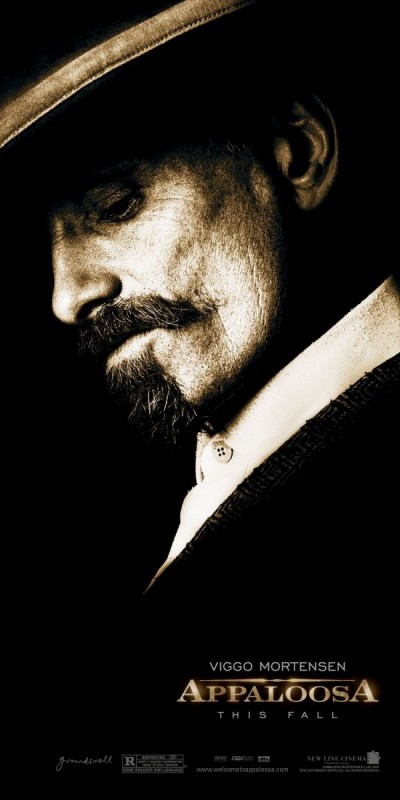 © New Line Cinema/Warner Brothers.
As per his usual ritual, Viggo Mortensen receives you in his socks, a bombilla of maté at hand, and tries his best to respond to you in the French that he learned during his wanderings in Canada. At close to 50, he's not the most conventional actor: "I am lazy," he confides, observing his black socks.

Half Danish, half American, Mortensen is multilingual, having lived in Argentina and Denmark prior to turning to New York to become a valued actor (The Indian Runner, 1991) then, much later, a star of the screen, in the phenomenally successful Lord of the Rings trilogy, adapted from Tolkien (2001).

Turning his back on the Hollywood machine, evading the role of sex-symbol that would fit so poorly with his outsider temperament, he then found refuge in the bosom of the disturbing and extraordinary David Cronenberg (A History of Violence, Eastern Promises) and continues to choose atypical films like this Appaloosa, directed by and starring Ed Harris. In this quirky Western he plays a killer on the side of the law, guardian angel of a sheriff (Harris) who is the bashful lover of a saloon-bar piano player of doubtful virtue (Renee Zellweger).

With trimmed beard and impeccable waistcoat, loyal, educated, Everett Hitch, the character, emits a quiet power which feels familiar to the actor: "He has no qualms about gunning down a bad guy, but he is deeply respectful of other people. I admire that respect: for myself too, I dislike pushing people, I know there are boundaries not to be crossed, it's one of the foundations of life as a couple," he explains.

Life as a couple? It's known that Viggo Mortensen is single, divorced from a punk-rock singer with whom he has a twenty-year-old son: "Today I am alone, most of the time, at least. It could be that the idea of life with a partner is an illusion of youth. I don't know the answer, I only know that to sustain a long-term relationship is excessively complex. Love is a little like a delicate plant: too much attention suffocates it; not enough - it dies. However I have been, and still remain, capable of love: it's necessary to remain open. In the end, to be a lover is a little like being an actor: it requires you to see the world through the eyes of another
person..."

Thinking all this to be enough shared confidences, Viggo Mortensen takes back control and delivers a masterly course in Westerns. It's impossible to interrupt him. He invokes the return to grace of this previously obsolescent genre, citing Anthony Mann, Jacques Tourneur, Missouri Breaks, and The Assassination of Jesse James by the Coward Robert Ford. Of Appaloosa, he liked "its honesty, the setting, the imagination" and above all, the women in the film, whose nuances he describes as though he had acted the parts himself. He finds this funny when it is pointed out: "My feminine side, probably..."

In November one assumes he will vote for Barak Obama: "He can, he must win, but it's not a done deal. In the big cities, New York, San Francisco, people have access to objective information, or at least to detail; that's not the case in much of the deep country where the right-wing exercises a monopoly around the means of informing people. Many Americans have not yet realised that McCain is going to do nothing except follow the Bush philosophy. In the face of this I hope that Obama maintains his energy, and above all, remains true to his intentions."

Yet Viggo Mortensen is not unhappy in America, the country where he "chooses to live." "There's no perfect political system. In my eyes, the worst crime of these last few years is that Bush and the fundamentalists, through their laziness and stupidity, have demonised science. Without science, any country remains stranded. And then there is this no-brainer around social security. For all that Europe knows, Americans are terrified of falling ill, because unless they are very rich, they do not have the means of getting well again. This sword of Damocles pervades their lives. A health programme should be the priority of both candidates."

At the time of the election Viggo Mortensen will be back home after a sojourn in Denmark where he is exhibiting photographs. These days he lives "far away, in the forest, in the North-west of America" but will not be more exact: "I am a loner who flees from stress, I feel good living close to nature, living with the same rhythm as animals and weather, no pressure, no constraints, no deadlines. I write poems, I paint, I read, I phone my friends, I plunge into thought and all of a sudden without my having seen the hours go by, night falls..."

What does the good nature of this sophisticated wild man hide? He assures me he has no excess neurotic baggage. "I am a happy man when I am not tied down," he says, taking a sip of maté. "I don't have a hidden self, I am not prone to depression. If I feel unwell, it is enough to walk in the forest to immediately feel better. I am an optimistic dreamer who has never been imprisoned by fear."
Top of this page
Last edited: 8 October 2008 15:01:26
© Le Figaro.