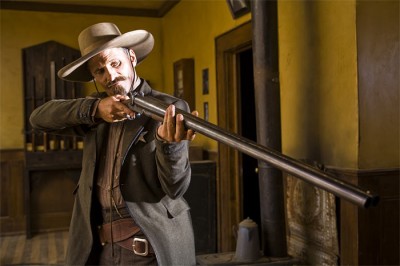 "The character, as far as I was concerned, was from Northern New York, but had been out West for 15 years," Mr. Mortensen said Wednesday during a phone interview from Los Angeles.

Hitch is the indispensable partner of Virgil Cole (Ed Harris); together, they've earned a modest living bringing order to frontier towns plagued by lawlessness in the 1880s.

Mr. Mortensen, a 1976 graduate of Watertown High School and a 1980 graduate of St. Lawrence University, Canton, said remnants of Hitch's imagined past here and as an former Army cadet can be found in everything from the way he handles his eight-gauge shotgun to his outfits.

"The clothes are bits and pieces of suits," he said. "It's sort of a mixture of what's left. He's clean and tidy, but he doesn't have much money. His way of riding and speaking are, in some way, remnants of being at West Point or being from that area."

Mr. Mortensen isn't a fan of most modern Westerns but said he was attracted to Appaloosa, in part, because it echoed some present-day issues.

"It has timely ideas about how much freedom is too much, for a person and even that of a country," he said.

It also offered him the chance to work again with Mr. Harris. The two have been friends since 2005, when they worked together on David Cronenberg's A History of Violence.

"I respect him as an actor and as a person," said Mr. Mortensen. "We got along well. I knew once we got going, there would be a shorthand and we would have a way to make this relationship (between Cole and Hitch) work, and people would feel that these two had a long relationship together."

Asked if he saw similarities between his off-screen friendship with Mr. Harris and their characters' relationship on-screen, Mr. Mortensen joked: "Well, we don't go around shooting guns."

The two also share a passion for horseback riding, which Mr. Mortensen said he's had since he was a small child. The actor is the son of Grace A. "Gay" Wright, Clayton, and V. Peter Mortensen, Cape Vincent.

The former Watertown resident recalls riding a few times around Cape Vincent as a teenager but said he had few opportunities to jump back into the saddle until he was cast in Young Guns II, which came out in 1990.

"I really enjoyed it," he said. "I got to ride in Lord of the Rings, which was really fun. And obviously, Hidalgo."

Mr. Mortensen said he still owns the horse he rode in Hidalgo, a 2004 film in which he played thrill-seeker Frank Hopkins, and the horse from the Rings trilogy.

The actor said he would be interested in doing another Western based on his recent experience.

"When they're done right, they're really great," he said. "I think Appaloosa is done right. It's made without imitation or pretension. It's very much in the line of the best of the classics."

Mr. Mortensen said his friend Michael Blake asked him to star in The Holy Road, a Western and sequel to Dances With Wolves that is expected to come out next year. Mr. Blake wrote both novels and adapted them both into screenplays.

"I was flattered that they would ask," the actor said. "But I just don't have the time."

Mr. Mortensen said Mr. Blake had wanted him to play Lt. John Dunbar in Dances, although the actor wasn't a box office draw in 1990. The part went to Kevin Costner, who won an Academy Award for his direction.

Mr. Mortensen will spend the next six months on worldwide promotion tours for Appaloosa and two other movies he stars in this fall, The Road and Good.

The Road, the hotly anticipated adaptation of Cormac McCarthy's novel of the same name, will arrive in theaters Nov. 26. Good, the chilling tale of a literature professor whose works are unexpectedly embraced by the Nazi regime, will arrive sometime in December.

Mr. Mortensen said his professor is, "in a way, not a likable character."

"I hope the movie shows how even a smart and nice and decent person can get sucked into something and get talked into certain things," he said.

Again, he sees echoes in that story to modern times.

Mr. Mortensen, an outspoken critic of the Bush presidency, said the American public was talked into several bad decisions in the name of patriotism.

"There's a lot of things we might want to take back if we had known," he said. "And this movie talks about how all the little choices on a daily basis all add up."
Top of this page
Last edited: 28 September 2008 15:40:57
© Watertown Daily Times Inc.