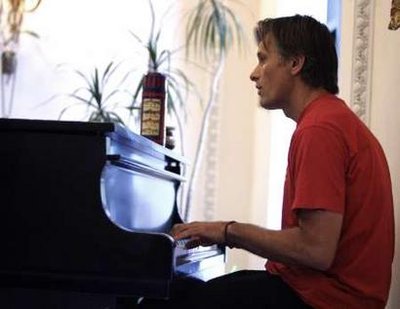 A crowd of fans began to gather, and one asked what he was playing. He answered, "I don't know, I just made it up." Another commented, "I didn't know you played," to which he responded, "I didn't either," laughing, "I won't quit my day job."

In the evening, Mortensen attended the premiere of his second film at the festival, Good, at the Winter Garden Theatre (he also stars in Appaloosa). Though it was raining, he pushed aside a barrier to get to the crowd of fans waiting outside the theater and began signing autographs.

Avid Viggo fan Joanne Chu-Fook, knowing Mortensen to be a Montreal Canadiens fan, gave him a Habs pin. "He put it on and continued signing autographs. But then he stopped, turned around to look for me and gave me a kiss on the cheek. It was shocking," she said with a grin, thrilled by the encounter.

Good co-star Jason Isaacs (aka Lucius Malfoy in the Harry Potter films) joined Mortensen in the rain to greet fans and both arrived in the theater with wet hair, in time to be photographed by the media.