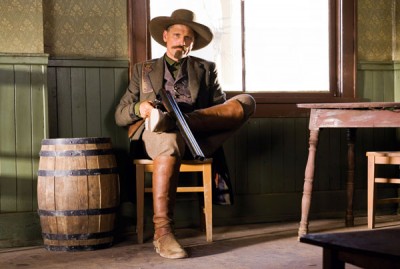 © New Line Cinema/Warner Brothers.
TORONTO - Just how fearless is Viggo Mortensen? Forget his naked fight scene in the movie Eastern Promises. The man is wearing a Habs T-shirt in the middle of Leaf Nation.

"Yeah. I've been booed on the street," says the man with the now-famous chiseled face as he speaks, barefooted, from a plush stage in Toronto's Royal York hotel.

Mortensen says the concept of teamwork is important in any effort involving more than one person, which is why he sees professional sport and acting endeavours in the same light.

It's also why he wanted to work on Appaloosa, Ed Harris's revisionist western based on Robert B. Parker's novel about two gunslingers who clean up a frontier town riddled with bad guys and bullet holes.

"There isn't much difference between sport and drama - except in sport, you don't know what's going to happen. But otherwise, it's about conflict and rising to the challenge before you. Both have props. Both have a stage, whether it's ice or a field. In a lot of ways, they're the same."

Right now, however, Mortensen is a little more articulate than your average jock in front of a microphone as he talks about his time with Harris on the Santa Fe set of Appaloosa, as well as the most recent turns in American politics.

In the film, Harris and Mortensen play Marshall and loyal sidekick, respectively. Both men carry guns, squint into the open plain and communicate with long, almost loving silences. They're the archetypal cowboys and the base layer of the American psyche that believes in riding into the sunset and heroic endings.

Mortensen says he loves the cowboy ideal as well as the cowboy esthetic, but the classic old codes are fast becoming obsolete as the western world faces a looming geopolitical shift as well as a climate crisis.

"We're going to hell in a handbasket. And just watching the recent (political) conventions, I'm amazed at how the very lack of discussion about certain issues is actually defining each candidate," he says, tucking his bare feet under one of the sofa cushions and nibbling on a chocolate bar.

"I made a disparaging remark recently about Sarah Palin - and I won't repeat it - but the thing that really bothered me about watching the Republicans was how they're trying to sell this idea of country first. It's the same thing Bush did. F*** the rest of the world, and I find that so weak. There's no real policy. They're philosophically bankrupt."

Mortensen acknowledges that most people don't like hearing bad news about the future, or the idea that change often demands personal sacrifice. He also acknowledges an affinity for dreaming big, and emphasizing the idea of possibility instead of pragmatics are particularly American obsessions - beliefs forged in the red-hot crucible of the formula western.

Appaloosa revises that western code by offering up a few simple, but important, changes such as a complex female character played by Renee Zellweger, as well as a somewhat warped notion of justice that allows the lawmen to overlook certain parts of the law when it gets inconvenient.

The one thing that doesn't change is the importance of the gun - in Mortensen's case, his character walks around with one of the biggest, longest firearms ever seen on film: an eight-gauge shotgun, or "punt gun."

"It was so big, I didn't know at first if I could walk around with it in the movie because it was so huge. Then we made the decision that he should walk around with it everywhere. The gun would be his bad-ass friend and sidekick," says Mortensen, who recently started his own publishing house dedicated to criticism, poetry and other forms generally poo-pooed by the publishing world.

"The gun is used as a sort of nuclear deterrent."

Mortensen says even the horses he and Harris ride in the film are bigger and taller than the rest of the ponies.

"When Ed and I cross the river and get to the other side (where all the baddies are waiting), our horses are that much bigger than everyone else's, so you get this psychological intimidation factor."

Mortensen says the tendency to puff up and have one hand on the holster at all times is not just an "American thing."

"When I did A History of Violence, the Europeans were saying it was all about gun culture and America's fascination with guns and violence. But I say first, they missed the whole point of that movie. I also say it makes them hypocrites. As far as violence and aggression goes ... no nation is innocent."
Top of this page
Last edited: 9 September 2008 06:15:57
© CanWest Interactive.