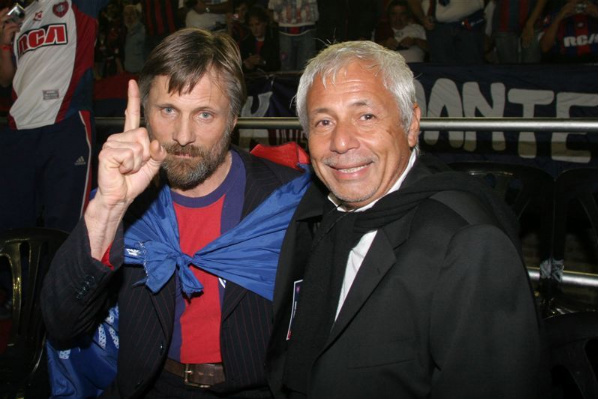 San Lorenzo 100th Anniversary Celebration, 4.1.08.
© Ary / mundoazulgrana.
The American actor Viggo Mortensen is in Buenos Aires to participate, just like any other ordinary fan, in the celebrations of the 100th years of the Argentine soccer club San Lorenzo de Almagro, his "great love", according to what he expressed.

Mortensen, the son of a Danish father and an American mother, lived in Argentina between the ages of three and eleven, and he became a supporter of the club.

"I am here because I feel a passion for San Lorenzo, because it is something that I understood and incorporated into my life when I was a child, and I permanently cultivate it, no matter where I am," Mortensen told EFE.

On Monday night, the protagonist of films like Lord of the Rings and Eastern Promises, among others, participated, wrapped in a San Lorenzo flag, in a demonstration with some other 18,000 fans that waited until midnight to celebrate the beginning of the day in which the club was founded, April 1st 1908 in the neighborhood of Almagro, in the city of Buenos Aires.

"I felt very happy among the people, among the San Lorenzo fans in a night of great joy in which we celebrate in front of the place where our glorious stadium the Viejo Gasómetro was, and it evokes great nostalgia and sadness because it's gone," he commented.

"Although I frequently travel to Buenos Aires, where I have friends and great memories, and I go to the stadium to see San Lorenzo, I could not miss this occasion. This 100th Year Celebration is very important for all of us, the fans of a glorious club," Mortensen added.

The actor stated that every day he reads "a lot of information about Argentina, about what is going on and about soccer."

"I am also familiar with the latest acts of violence that occurred connected to soccer, about the deaths that were caused by something you cannot call passion for a sport. And about the awful things that happened among the River Plate fans," he remarked.

Mortensen was referring to the clash among violent River Plate fans that took place last Sunday before the match against Velez Sarsfield, which resulted in seven of them being wounded and 38 incarcerated, and he said that "those things don't happen in San Lorenzo."

"Soccer is so beautiful, so dear, that one cannot understand how these things can happen," he added.

Viggo Mortensen said he hopes that San Lorenzo will make it to the third round of the Copa Libertadores de America (they will play on Thursday against the Brazilian team Cruzeiro in a key match for Group 1), and that "they will win that tournament, which is the great goal of all San Lorenzo fans."

"I am just one more San Lorenzo fan, and there is nothing special about that. Tomorrow we will all get together in the new stadium, and if there is a celebration that I wanted to be a part of, it is this one," he concluded.
Top of this page
Last edited: 1 September 2008 10:41:03