Henry James, Not Too Literally 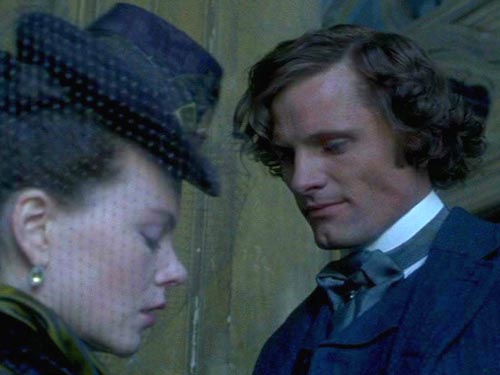 © Polygram Filmed Entertainment/Gramercy Pictures.
One early poster for the film that represents this season's great meeting of the minds - Henry James' richly perceptive Portrait of a Lady, as filtered through the acute feminist vision of Jane Campion, director of The Piano - presents a disembodied torso in a ghostly white dress. A man's hand reaches across the corseted waist, insinuatingly ready to appropriate control or to violate the starched, forbidding costume buttoned straight up to this woman's neck.

The effect is eerie and stark, as penetrating as an X-ray. And it captures the daring, abstract tone of Ms. Campion's adaptation. Instead of faithfully reiterating James's novel, Ms. Campion chooses to reimagine it as a Freudian fever dream. Fantasies intrude; prison bars or doorways or mirrors offer tacit commentary; the story's well-bred heroine abruptly sniffs her boot or tries to hide an undergarment hanging on a door. With startling intuitiveness, Ms. Campion traces the tension between polite, guarded characters and blunt visual symbols of their inner turmoil.

This approach, brilliantly eccentric even when it yields mixed results, has the liability of sometimes leaving its characters stilted and opaque. And it is stymied by the story's finer subtleties, especially in its last scenes; there are nuances to The Portrait of a Lady that may simply have no visual or dramatic equivalent. Still, Ms. Campion's film stands as a fascinating experiment, alive with elements of imagination and surprise. For better or worse, with formidable intelligence, she appropriates this story as her own.

Ms. Campion makes few concessions to those who like their literary adaptations literal or enjoy watching a new tea service in every scene. Her film is the bold interpretation of a classic, not a freestanding work on its own.

And while this Portrait of a Lady shares visual beauty and a tough-minded spirit with The Piano, the cumulative distancing effect of its quiet, sleepwalking style keeps it from being a success of that order. It still inspires enormous interest and admiration.

Although it will resonate most deeply with viewers who already know Isabel Archer, James's headstrong and much-admired young heroine, this film presents a more timid-seeming Isabel than the one found on the page. As played by Nicole Kidman, she has the demure grace redolent of a John Singer Sargent painting, but she seldom displays what James called "her general air of being someone in particular."

This matters greatly, since Isabel is beset by admirers throughout the story, and since the novel ascribes much of this attractiveness to the vigor of her mind. Without the intellectual dazzle that sets the novel in motion and brings Isabel both tribute and suffering, The Portrait of a Lady risks being reduced to a quaint 19th-century Dating Game with adoring bachelors appearing at every turn.

Indeed, Ms. Campion toys with this in her first scene by beginning the film in figurative midstream. There is Isabel in a lush English garden. (Gorgeous cinematography by Stuart Dryburgh, who brought similarly clean, spare beauty to The Piano, gives the greenery an otherworldly glow.) Obviously upset, she has just refused a marriage proposal from the very wealthy Lord Warburton (Richard E. Grant), whose castle has a moat. "I adore a moat," Isabel says conciliatorily. Laura Jones's screenplay does very well at extracting the novel's most trenchant dialogue: the viewer has the hint that Isabel is surrounded by a moat of her own.

An American brimming with great youthful hubris, the orphaned Isabel is brought to Europe at the behest of the Touchetts, her relatives, who live in England and have a banking fortune. Old Mr. Touchett (John Gielgud, wonderful in his few scenes here) is beguiled by Isabel. So is Ralph Touchett, his son. Now, Ralph Touchett is described on the page as sickly and homely, but Ms. Campion has cast this role with Martin Donovan, the quietly magnetic star of several Hal Hartley films. This choice, like all of the film's best touches (Mr. Donovan impressively provides warmth and focus), cuts through the book's dense detail to summon the story's essential truth.

There is one serious casting gaffe: John Malkovich as Gilbert Osmond, the scheming esthete who marries Isabel for her money after old Mr. Touchett leaves her a large sum. The role calls for cool decadence with a shade of sadism, which is certainly Mr. Malkovich's cup of poisoned tea. And the film, in its curious somnambulist style, does put Isabel and Osmond through the precise paces James described, as he plays to her rebellious horror of the genteel life. "She is quite capable of marrying him for the beauty of his opinions or his autograph of Michelangelo," sniffs Shelley Winters as Mrs. Touchett, Isabel's aunt.

But Mr. Malkovich's purring, malevolent singsong has been overused in cynically seductive roles. And his Osmond, like Viggo Mortensen's persistent Caspar Goodwood (meant to be as stalwart and dull as his name suggests), isn't able to take a well-defined position in the constellation of men around Isabel. So much social observation and psychological texture has been stripped from this story that the characters lose their rough edges. Try as she may, Ms. Campion has no substitute for the Jamesian freeze-frame, in which the author halts the action and devotes thousands of words to analyzing every last aspect of whatever has transpired.

If Barbara Hershey fares outstandingly well here as Mme. Merle, who becomes a Machiavellian mentor to Isabel and sends her into Osmond's path, that's in part because she has the film's best-articulated role. Ms. Hershey's brittle, poignant performance captures the film's idea of what can happen to a woman of cleverness and ambition when she lives in the thrall of a powerful man. At her lowest moment, Madame Merle is flanked by a strategically placed nude male statue that underscores this point.

Also in The Portrait of a Lady are Mary-Louise Parker as Henrietta Stackpole, the precociously obnoxious American journalist who is also Isabel's devoted friend; Shelley Duvall as Osmond's frilly, fatuous sister; Valentina Cervi as Pansy, the convent-raised daughter whom Osmond uses to his own best advantage, and Christian Bale as Edward Rosier, Pansy's suitor.

When Ms. Campion streamlines this romance in her typically arresting fashion, she is smart enough to omit the fact that Rosier takes fussy pride in his china collection. Instead, the film watches him at a ball where ladies literally swoon from heat and excitement, and where Edward himself is driven wild by the sight of Isabel holding Pansy's bouquet.

From deep inside the film's realm of secret longings and hothouse eroticism, Edward pleads with Isabel. "May I hold it?" he begs. "May I at least have a flower?"
Top of this page
Last edited: 14 August 2008 14:16:54