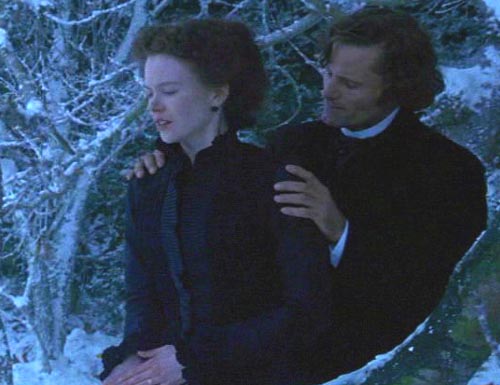 © Polygram Filmed Entertainment/Gramercy Pictures.
The success of Jane Austen on the silver screen has led to a sudden outpouring of movies based on classic literature. The flood, which has already started, will include new features from the works of William Shakespeare, Charles Dickens, Thomas Hardy, and Henry James. Suddenly, all the novels we were forced to read in high school and college English classes are being filmed. And, if you ignore last year's ignoble The Scarlet Letter, not one (thus far) has been botched up.

The Portrait of a Lady, the first motion picture adaptation of James' beloved classic, presents a stark contrast to the light-and-sunny Austen movies. Although it examines some of the same issues as Pride and Prejudice, Sense and Sensibility, and Emma, the perspective is much darker. Those expecting a light romance from The Portrait of a Lady are in for a rude awakening.

Even though The Portrait of a Lady deals with characters and situations in late nineteenth century Europe, its relevance for today's audiences is undeniable. Social standards and practices have changed dramatically in the last one-hundred years, but human nature remains immutable. Actually, director Jane Campion (The Piano) is a little too obvious about connecting this 1881 story with the 1990s. She opens the film with a brief montage featuring contemporary, young Australian women ruminating about kissing, love, and intimacy, then abruptly shifts to a close-up of Nicole Kidman's face.

Kidman, using a passable American accent, plays Isabel Archer, a headstrong-but-naive young woman who, as the story opens in 1872, has recently arrived in England from America. While there, she's staying at the estate of her aunt (Shelly Winters) and uncle (John Gielgud). Her closest companion and confidante is her cousin, Ralph Touchett (Martin Donovan), a consumptive who encourages his father to will a large sum of money to Isabel. She is also pursued by two suitors: the rich and unexciting Lord Warburton (Richard E. Grant) and the dashing Caspar Goodwood (Viggo Mortensen). She rejects both, saying "I don't want to be a mere sheep in the flock. I shall probably never marry." Her desire is to explore the world and forge her own way in it.

When her uncle dies, leaving her a fortune of 70,000 pounds, she has the financial means to do so. She begins to travel, spending a great deal of time in Italy. But her naivete enables her to be led astray by the sinister Madame Serena Merle (Barbara Hershey), whom she falsely believes to be her friend. Madame Merle contrives a meeting between Isabel and the dangerous Gilbert Osmond (John Malkovich). Soon, Isabel, seduced by Osmond's promises of love, agrees to marry him, believing that she will have the upper hand in their union. Too late, she recognizes Osmond's true nature.

Those familiar with Jane Campion's previous effort, The Piano, will not be surprised by the dismal tone of The Portrait of a Lady, which, if anything, is even more grim than that of the novel. Campion films over half of the scenes in dim light, making effective use of contrast to highlight character attributes. Isabel is frequently shown standing in patches of light while Madame Merle and Osmond keep to the shadows. Occasionally, Campion gets a little too artsy, as in a surreal, black-and-white dream sequence where Isabel's subconscious wrestles with Osmond's declaration of love.

There are problems with Portrait's structure and pace, which could easily be the result of trying to condense a 600+ page book into a one-hundred forty-five minute movie. A great deal of background is omitted, which makes the beginning of the film erratic and, at times, almost incoherent. The first third - that portion which occurs before Osmond makes his initial appearance - is rather dull and uninvolving. Isabel's character doesn't really start developing until Osmond comes on the scene. Up to that point, she's just an independent 23-year old with insatiable curiosity but not much personality. Later, especially as the movie builds to an emotionally-wrenching climax, we are drawn into Isabel's world.

As has been the case in almost every period drama released in 1996, the acting is impeccable. Nicole Kidman impresses as Isabel, especially in the late scenes. We see the character's once-steadfast resolve crumble then attempt to re-assert itself as she faces her physically and psychologically abusive husband and learns the secret shrouding the identity of his lone daughter (Valentina Cervi). Since Campion has a great love of close-ups, Kidman's face and eyes enhance her performance.

John Malkovich is at his creepy best, playing Osmond as a vicious, malignant Svengali. This kind of villain is far more interesting than the ranting psychopaths who populate films with less ambition. Osmond is truly frightening, and a great deal of credit goes to Malkovich. Watching this performance, it's easy to understand how Isabel became trapped in such a relationship.

The supporting cast is solid, and includes Martin Donovan (Flirt) as Isabel's one true love, Viggo Mortensen (Daylight) and Richard E. Grant (Twelfth Night) as her disappointed suitors, Valentina Cervi as her step-daughter, Barbara Hershey as the duplicitous Madame Merle, and Mary-Louise Parker (Boys on the Side) as Henrietta Stackpole, Isabel's female compatriot. The settings and period detail are attended to with particular care.

The Portrait of a Lady is a difficult story to film, and Jane Campion and screenwriter Laura Jones have done an admirable job with this adaptation. The motifs of love, betrayal, and accepting the consequences of one's actions are well-established. The movie does not attain the emotional depth of Michael Winterbottom's recent Jude, but there are definite thematic and tonal similarities. The result is a fascinating portrait not only of a lady, but of the society and marriage that entrap, then attempt to destroy, her.
Top of this page
Last edited: 14 August 2008 14:18:47