By - translated by Mums

Source: Ríkisútvarpið RUV
This is a transcription of the interview Viggo gave to Icelandic TV prior to the opening of his Skovbo exhibition. 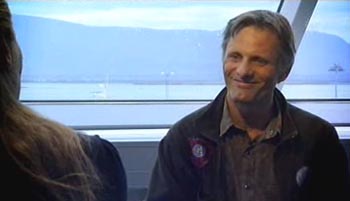 Interviewer: Thank you! Why have you chosen to show your photographs here?

Viggo: Because I was invited, and I think it's a good place. I have been here before and seen other exibitions. And it was also a good excuse to come back to Iceland . It's the fourth time I've been here and I like it a lot.

Interviewer: You also said it's a kind of gift, because we don't have so many forests here?

Viggo: Yes, that's right. It's mostly pictures of trees or forests in some way, people in the forest, animals in the forest, but mostly just trees and you don't have that many here.

Interviewer: The pictures are from many places, many different places. A tree is a tree in all places? Or what?

Viggo: Every tree is something special, just like people are. All different, but... I look at them as I look at people. I get along well with most trees. I don't get into arguments with them, and if I do it's probably my own fault . If I don't watch where I'm going when I'm in the forest, it comes back and smacks me in the nose and I only have myself to blame.

Interviewer: What about your other artistic endeavours, you write poetry, you paint, you make music and you are also an actor. Does it all come from the same source?

Viggo: Yeah, yeah, it has to do with, I feel that, it's just a way to pay attention, listen, take part in your own life, take part in what goes on in the world.

Interviewer: What do you think of the response you get from the viewers, are you accepted in a different way because you're a famous actor?

Viggo: If I was only a photographer I would not be so well known, hopefully, some people would still like it and buy the pictures and books, as they do now. But I am aware that, especially after Lord Of The Rings and the following films, people know who I am and sometimes comes to exibitions, like this one, because of that.

Interviewer: Does it get in your way?

Interviewer: Are you a...

Viggo: Nature lover? I like spending time in nature. I also like big cities, but if I can't get out to the forest or just outside a bit everyday, it gets stressful.

Interviewer: Is it because you come from Denmark?

Viggo: I don't know. I'm not from Denmark. I lived in Denmark for a while, growing up, and I have some family there. I have lived in many places in the world and valued nature everywhere. I like to go camping and walking in the woods, in the mountains.

Interviewer: So you don't see yourself as Danish?