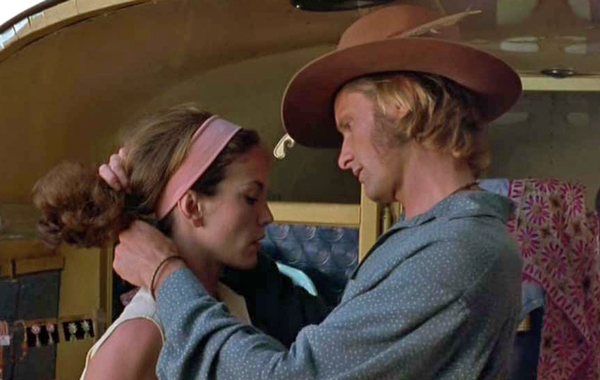 © Miramax Films / Village Roadshow.
Somehow A Walk On the Moon, which takes place at a working-class Jewish resort in upstate New York during the summer of 1969, manages to visit every iconic event of that characteristic season which defined a generation without ever feeling like a parade of trite and recycled bohemian cliches.

I'm not entirely sure how this miracle was performed, but former supporting actor turned director Tony Goldwyn (the bad yuppie in Ghost), manages to embrace the rampant and inevitable Moonwalk-watching, Vietnam-talking and Woodstock-going, yet refuses to let them weigh down his picture, narrowing his focus instead on Pearl Kantrowitz (Diane Lane), a discontented Brooklyn housewife who succumbs to the spirit of that summer while on vacation in the Catskills and has an affair with a enigmatic free spirit (Viggo Mortensen).

Lane gives her best performance since playing Paulette Goddard in Chaplin, subtly revealing Pearl's dormant regrets about her youth lost to an early pregnancy, and portraying vividly both the resuscitated joy and stark regret stirred by her infidelity with the uninhibited younger man who sells blouses out of a bus at the roadside community of bungalows where she stays with her kids while her husband (Liev Schreiber) drives back and forth to the city for work.

While the story arch is obvious and several scenes are little more than stock episodes for any film depicting this era (nekkid frolicking in a clear mountain stream, Woodstock, et al), Goldwyn has a smart, subtle, hands-off style that allows the strongly-established relationships carry the movie.

Although the film doesn't give us enough explanation of Pearl's marital discontent, there is a potent, underlying sense of family history established by the layered interaction between Lane and Schreiber. The unflagging "Oy" of Pearl's mother-in-law (Tovah Feldshuh) adds substantially to the emotional undercurrent, and Anna Paquin, playing Pearl's teenage daughter, absolutely nails the petulance of rampant puberty.

Goldwyn's keen sense of detail aids the picture's distinctive authenticity. The film opens with the loading of the Kantrowitz's realistically over-packed station wagon. There is discernible a sense of kinship among seasonal residents of the low-rent resort. While on his own in Brooklyn during the week, Schreiber eats cereal out of a frying pan with an overflowing sink of dishes in the background.

In the hands of a hack, this movie could have easily turned out like "The '60s" - that train wreck of Boomer banality broadcast on NBC during the February sweeps. But Goldwyn is clearly a superior talent behind the camera than in front of it, because it's not just the Summer of '69 stuff he overcomes.

He's also saddled with free love and drug culture themes, and a highly-concentrated coming-of-age story (Pearl's daughter gets her first period, her first kiss and considers going all the way, all on the same day).

Yet, A Walk On the Moon, with its gentle pacing and strong sense of time and place, is engaging in the most simple and honest ways - it takes us inside each character's emotions, making us care about them like we're part of the Kantrowitz family.
Top of this page
Last edited: 3 August 2008 14:24:46