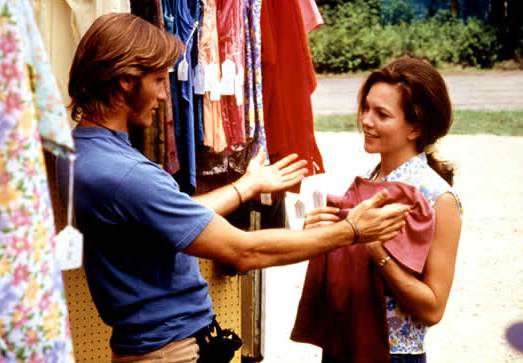 © Miramax Films / Village Roadshow.
A Walk on the Moon follows the same pattern as Forces of Nature by matching up a square with a free spirit, but this time the relationship rings true. It's the summer of 1969: the time of the Apollo moonwalk, political protests, and revolutions in sex, drugs and rock & roll that would peak at Woodstock. Pearl Kantrowitz (Diane Lane), a Jewish housewife and mother vacationing with her family at a bungalow in upstate New York, feels frustratingly remote from the action. Pearl was a teenager, like her daughter, Alison (Anna Paquin), when she married Marty (Liev Schreiber), now a TV repairman who works in the city and visits only on weekends. Pearl feels cheated of her adolescence. Enter Walker Jerome (Viggo Mortensen), a hippie who travels the resort route in a bus, selling fashions. Pearl is intrigued. Her mother-in-law (Tovah Feldshuh) warns her not to stray, but Pearl and this "Blouse Man" are soon skinny-dipping and running off to Woodstock, where a chance encounter with Alison drives a wedge into the family.

Working from a sharply observed script by Pamela Gray, actor turned director Tony Goldwyn and co-producer Dustin Hoffman wisely keep the family story front and center. And whenever the drama drifts into soap opera, the actors restore the balance. In a terrific cast, Schreiber stands out as the husband who may lose the battle to save his marriage, but not for lack of trying. On the porch of their bungalow, Marty is the one who turns on the radio to lead his wife in a dance to music that catches the Woodstock spirit of change. The scene, like the film, is a haunting blend of humor and heartbreak.
Top of this page
Last edited: 3 August 2008 13:49:20