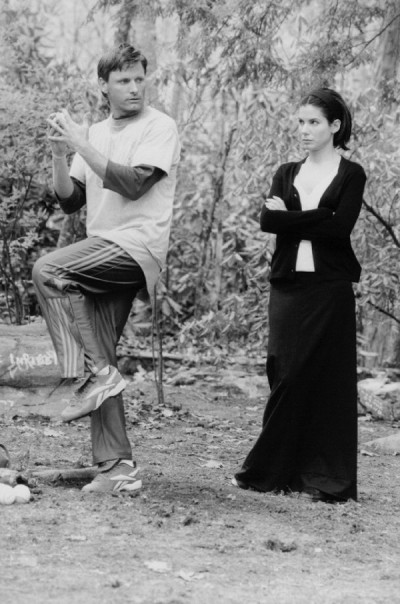 © Columbia Pictures Inc.
In his thriller, The Long Good-bye, Raymond Chandler wrote that "Alcohol is like love: the first kiss is magic, the second is intimate; the third is routine". Successful New York writer Gwen Cummings (Sandra Bullock) rarely stops at just three kisses: she's a party girl who ricochets from nightclub to bar, from one hangover to the next.

Her boyfriend Jasper (Dominic West) exhibits the same self-destructive streak so Gwen can't see the damage she's doing to herself, not until she turns up half drunk for her sister Lily's (Elizabeth Perkins) wedding and trashes the reception and the bridal limo.

Fortunate not to end up in jail, Gwen is sent to a rehabilitation clinic for 28 days where, under the aegis of counsellor Cornell (Steve Buscemi), she's told to get her life in order. Despite some initial hostility, Gwen's carefully constructed defences can only withstand so much pressure and eventually the companionship of her fellow rehabbers forces her to take a good long hard look at herself.

Casting Bullock against type, as a pill-popping boozehead who needs to get on the wagon before she goes off the rails, shows savvy and courage on the part of director Betty Thomas, and Bullock certainly doesn't disappoint, turning in a credible and unattractive performance during the first half hour.

Once Gwen arrives in rehab, the film's colourful personality cleaves in two: the smaller part being Gwen's battle with the booze; the larger portion afforded to a chain of comic interludes resurrecting the kooky, girl-next-door Sandra Bullock we all thought had been given the day off.

The majority of these humorous moments revolve around a cheap'n'cheery soap opera which forms the staple ingredient of the patients' late night televisual diet. Some punchlines hit their mark - such as a party thrown by Gwen for her room-mate Andrea in which the patients re-enact a scene from the show; some most clearly do not, like the lame final scene.

Bullock is by far the most watchable thing in 28 Days and holds the film together when the heady cocktail of laughter, tears and romance threatens to sour. She makes us care about Gwen's plight, despite her character's appalling behaviour.

Mortensen's baseball pitcher, whose career and marriage struck out on his addiction to alcohol and women, is interesting since, from the off, he is set up as a possible romantic interest for Gwen. Surprisingly, 28 Days refuses to unite these lost souls for the expected feelgood finale.

Buscemi plays his counsellor completely straight, with nary a flicker of the quirkiness which has become his trademark, and ultimately delivers one of the strongest performances in the whole film.