Your Review Guide To 28 Days 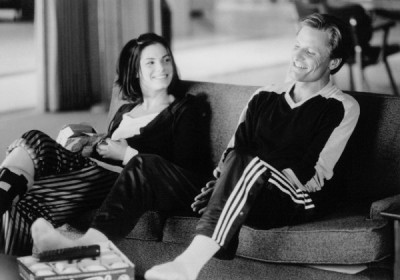 © Columbia Pictures Inc.
Anyone can mock the rituals and touchie-feelie newspeak of rehab: One AA meeting and you're armed with a year's worth of gut-busters. But this dark comedy pulls off something far harder, managing the monumentally delicate balancing act of jeering at 12-step culture's airy-fairy ridiculousness without ridiculing rehab itself. Way to go, writer Susannah Grant and director Betty Thomas!

Gwen Cummings (Sandra Bullock) is an Olympic-caliber party animal; she and boyfriend Jasper (Dominic West) are ironman decathletes of drinking, drugging and dancing on tables, utterly nonplussed by waking up to find peek-a-boo holes burned into Gwen's bra. But Gwen raises the bar at her older sister Lily's (Elizabeth Perkins) wedding: She arrives late and disheveled, makes a painfully tasteless toast, falls into the wedding cake and takes the bridal limo for a joyride, crashing it into a neighbor's porch. Next stop: court-ordered rehab at an isolated rural facility full of losers, all of whom know exactly what Gwen thinks of them before she ever opens her snarky mouth. They include a 17-year-old heroin addict and repeat-rehabber (Azura Skye); German go-go boy Gerhardt (the hilarious Alan Tudyk); a sour, middle-aged doctor (Reni Santoni); country-boy baseball star Eddie (Viggo Mortensen); a spoiled rich kid (Michael O'Malley); a drug-addicted single mother (Marianne Jean-Baptiste); and a downtrodden middle-aged housewife (Diane Ladd). Gwen skewers them mercilessly, but the prickly laughs don't stop as she realizes that she's no better off than they are, her sharp tongue notwithstanding; the movie's slyest trick is shifting almost imperceptibly from Gwen's snide mockery to the shared graveyard humor of the rehabbers.

Bullock is the glue that holds this film together, but she's supported by an amazing ensemble, including Steve Buscemi as the group counselor who's walked the walk and now talks the talk. Funny, thought-provoking and, yes, touching.
Top of this page
Last edited: 12 July 2008 08:26:44