A Steamy Walk On The Moon 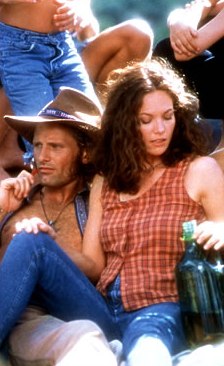 © Miramax Films / Village Roadshow.
Temptation comes in many forms. For Pearl, a frustrated housewife in the touching new romance A Walk on the Moon, it rolls up in a dilapidated bus.

The driver, Walker (Viggo Mortensen), operates a makeshift blouse shop out of his vehicle. Bored with the limited attractions at the Catskills, where Pearl (Diane Lane) is vacationing in the summer of 1969, she stops in just to look.

Pulling out a box of tie-dyed T-shirts, Walker tells her they're the latest thing. She says nobody will buy them, but tries one on anyway. "It fits real good," he purrs, which is no exaggeration.

Having made the sale, Walker leans over to cut a tag off the shirt so she can wear it out. It's an electric moment - Pearl literally reels backward, as if shocked by his touch.

At its best, as in this scene, A Walk on the Moon captures the pull of sexual desire. So what if Pearl has a couple of kids back in the cabin and a husband, Marty (Liev Schreiber), repairing TVs to pay for their vacation? To paraphrase Woody Allen, the heart, or at least some part of her anatomy, wants what it wants.

Adultery is hardly a new theme at the movies. But first-time director Tony Goldwyn (scion of the family that started MGM) brings a freshness to an old story. The script by Pamela Gray is unusually nuanced. Amazingly, she wrote it as her thesis at UCLA film school.

Pearl's motivation is clear and even elicits sympathy. She married Marty at 17 after becoming pregnant the first time they slept together. Her sense of life passing her by is underscored when the '60s happen. All that freedom, symbolized by Woodstock just miles away, only makes her feel more trapped.

Walker is no mindless hippie going with the flow. He cares about Pearl. Certainly, he cares about pleasing her sexually. She gets her own flight to the moon at the same time as Neil Armstrong. And what Walker does to her under a waterfall should be bottled.

Their sexual connection is reinforced by the blazing chemistry between Lane (the adorable child in A Little Romance) and Mortensen. While he seems pallid in his solo scenes, Mortensen comes alive when Lane is around. It's clear why Pearl would risk everything for this stranger.

Marty is the weak link in the script; he's just too good to be real. But Schreiber, a terrific actor who has yet to find a breakaway role, makes him believable. He plays Marty with heartbreaking vulnerability, which has the effect of pulling the audience in two directions, just like Pearl.

In interviews, Dustin Hoffman, who produced A Walk on the Moon, has sworn he kept his hands off the film. Still, there are times when Schreiber is a dead ringer for Hoffman in The Graduate. When he goes after his errant girl, you halfway expect Marty to yell out, "E-laine."
Top of this page
Last edited: 27 June 2008 04:26:31