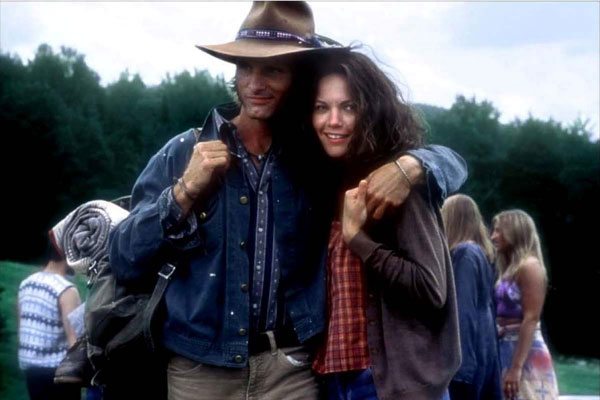 © Miramax Films /Village Roadshow.
It occurred to me, while laboring to write this column and make a bit of money to support my family, that it would do wonders for my stifled creativity to drive somewhere tropical, sip single-barrel bourbon, and have sex with a tawny barmaid. Of course, when I was at liberty to do all that I didn't. Instead, I'd think, if I could only meet a woman of substance and put down roots, I'd be less anxious about earthly impermanence and be really poised to cultivate my creativity ... By a not-so-strange coincidence, this conflict is prominent in lots of recent movies, among them A Walk on the Moon, Metroland, and Among Giants, which explore the natural impulse to settle down vs. the equally natural impulse to be wild and free - the yearning for permanence vs. the claustrophobic dread of monogamy.

No dilemma causes men and women to fantasize so intensely about splitting themselves in two and taking both roads. And none provides more fodder for melancholy middle-aged comedy, from the heavyweight musings of Milan Kundera in The Unbearable Lightness of Being to the fluffy screwball machinations of Forces of Nature. In the latter, currently the most popular movie in the country, the filmmakers strain to bring together free spirit Sandra Bullock and affianced fuddy-duddy Ben Affleck. Then they do a bizarre about-face and deliver a paean to the bliss of domesticity. That ending satisfies no one, but you can appreciate the filmmakers' lack of options: Kundera resolves the conflict by hurtling his lovers' pickup down an incline and crushing their bodies to a pulp.

It's worth remembering that Kundera's sexual parables unfold against a backdrop of totalitarian repression, whereas our own grapple with a more confusing legacy: the counterculture of the '60s and '70s. Set in 1969, A Walk on the Moon devises a deliciously resonant dual setting: a Catskills summer community to which middle-class Jews from the city migrate to swim and eat and play mah-jongg, and the gathering hippies at nearby Woodstock. The proximity of New World '60s hedonism puts a sort of lunar spell on Pearl (Diane Lane), a 31-year-old mother of two whose own "summer of love" was cruelly brief. She got pregnant at 17 and promptly married the baby's father, Marty (Liev Schreiber) -now a TV repairman who's stuck in the city fixing broken sets in time for Neil Armstrong's moon walk - and settled into a life of looking after kids and chopping vegetables. So, let's see: hot weather, free love in the breeze, an anti-establishment, pubescent daughter (Anna Paquin), and an absent husband. Into this sexually tremulous milieu comes Viggo Mortensen, one of the van-driving peddlers who make regular trips to the compound to sell shmattes to bargain-hungry Jewish ladies. A rangy, purringly diffident blond gentile with blue eyes and a cleft chin, he watches as Pearl slips on a tie-dyed T-shirt, then leans his lips toward her bare throat - and bites off the dangling price tag. One can hardly blame Pearl for saying, "Family shmamily."

The elements in A Walk on the Moon, which is directed by the actor Tony Goldwyn (the bad guy in Ghost) and written by Pamela Gray, feel miraculously right. Gray's script seems meticulously worked out, right down to setting the moonwalk against Pearl in her own libidinal orbit. But if the writing is tidy, it's never glib - it has too much texture for glibness. I think back with pleasure on the shared fascination of Marty and his young son over how many minutes it takes him to drive from the city to the Catskills every week, the bubbly nonchalance of the Catskills women, and the presence in the margins of Orthodox Jews, who find it increasingly difficult to coexist with Purple Haze, skinny-dippers, and women's lib.

Diane Lane's performance puts her in the company of the best young actresses alive. Her Pearl is at an age when you can see in her skin the last traces of girlish pliancy but also where the cares have begun to leave a residue. Alone in her kitchen with her cutting board, she seems to be smelling her own faint over-ripeness; when Mortensen holds his stare a beat too long, her body bends toward his as if it knows, on a cellular level, that this way lies nourishment. Lane and Mortensen have an extrasensory rapport - they magnetize each other. When you see them at Woodstock it's through the aghast eyes of her daughter, who thought of herself as a groover until she caught a glimpse of Mom in a most unmomlike state of sexual ecstasy - Dionysically pickled.

This kind of picture has one of two thrusts: It either sides with the suffocated housewife who, like Ibsen's Nora, strives to break free of a repressive patriarchal hold, or it demonizes a culture that tempts men and women to put their own gratification before their responsibilities as parents. A Walk on the Moon leans to the side of "family values" but scapegoats no one - neither the decent but insensitive Marty nor the opportunistic salesman. Even the moralistic mystic of a grandmother, Lilian (Tovah Feldshuh), can't forestall Pearl's flowering. Lilian embodies the culture's eternal wisdom but also its antediluvian folly. Greeting the news of her granddaughter's first menses, she blurts, "Mazel tov!" and then slaps the child - a tradition evidently meant to celebrate the beginning of reproductive life, while reinforcing a girl's sense of shame over the fact that she's now "unclean." A culture so stern would drive most people into the tie-dyed bosom of a salesman, even if he didn't look like Viggo Mortensen.
Top of this page
Last edited: 27 June 2008 04:16:06