A Giant Leap For A New York Housewife 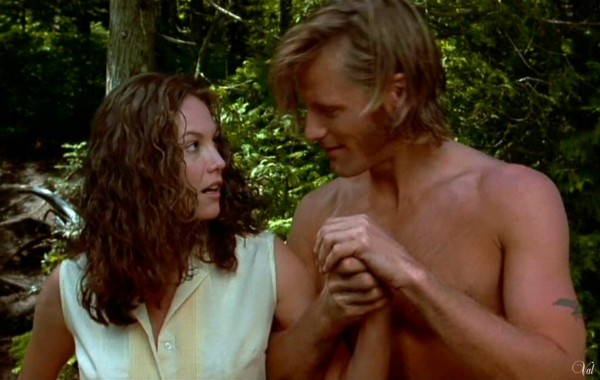 © Miramax Films/Village Roadshow.
A Walk on the Moon is as seductive as the handsome, itinerant hippie who turns its heroine's life upside down. In this nostalgic, beautifully acted tale of romance and responsibility, that heroine is a housewife who could not be at a more dangerous time and place for maintaining the status quo.

As she has every summer, Pearl Kantrowitz (Diane Lane) totes her ironing board, dish drainer, children and mother-in-law to a Jewish holiday camp in the Catskills to vacation all summer while her husband Marty (Liev Schreiber) stays in New York City repairing television sets. It's a peaceful but dull existence, and that's the way it is supposed to stay.

Knowingly directed by the actor Tony Goldwyn, A Walk on the Moon is about something different in the air. The year is 1969, the event of the title is about to happen and the camp is near the site where Woodstock will soon explode.
That might seem like a much too convenient coincidence if the screenwriter, Pamela Gray, had not been there to see the local kosher butcher shop rename itself the Funky Chicken in honor of hippies in the neighborhood and seismic currents too powerful to ignore. In any case, the film lets this situation yield a steamy, enveloping romance, a family crisis and the fallout that crisis has to bring.

Originally called The Blouse Man in honor of its traffic-stopping title character, A Walk on the Moon has its elements of attractive fantasy. The blouse man is one of the peddlers who visit the camp to sell their wares, and it took Ms. Gray many rewrites to turn him into an object of desire. However, as played with silky eroticism by Viggo Mortensen, the gentlemanly Walker Jerome arrives to charm the camp's old ladies and weaken Pearl's knees.

It took just as many rewrites to make the straight-arrow Marty equally appealing in his own way, but the film succeeds in doing that too.

Ms. Lane movingly captures the dilemma of a woman married at 17 and yearning for freedom just as her own daughter (Anna Pacquin, utterly persuasive as a turbulent American adolescent) feels very much the same. And in a film that, as Goldwyn said when it was shown at the Sundance Film Festival, means to mirror changes that shook the nation during that era, A Walk on the Moon lets Pearl follow through on her yearnings.

On the night of the moonwalk, Pearl embarks on her own dangerous adventure into terra incognita, which the film renders with a tenderness virtually unknown on screen these days. The mood is set by a soundtrack of sweet, liberating music, mostly album tracks or cover versions rather than familiar hits, from the artists (Joni Mitchell, the Jefferson Airplane, Jesse Colin Young, the Grateful Dead, Bob Dylan) whose voices defined the times.

With a little too much meddlesome wisdom from Grandma (Tovah Feldshuh), the film leaves Pearl with a sexual Sophie's Choice and at last gives Schreiber's character his due. In a film with Dustin Hoffman as one of its producers, Schreiber makes Marty the kind of touching, insistent presence that Hoffman has himself often played, and does full justice to the "What next?" questions raised by the Blouse Man's magnetic pull.

The film's final image is among those that could be dismissed as preposterous for anyone so inclined. Sternly analytical viewers need not apply. However, A Walk on the Moon, with its evocative Catskills aura and warmly attractive look (with cinematography by Anthony Richmond), is more likely to quell such objects than to raise them.

Even when it turns turbulent, the film sustains its warm summer glow, and makes itself a conversation piece about the moral issues it means to raise.
Top of this page
Last edited: 27 June 2008 04:01:17