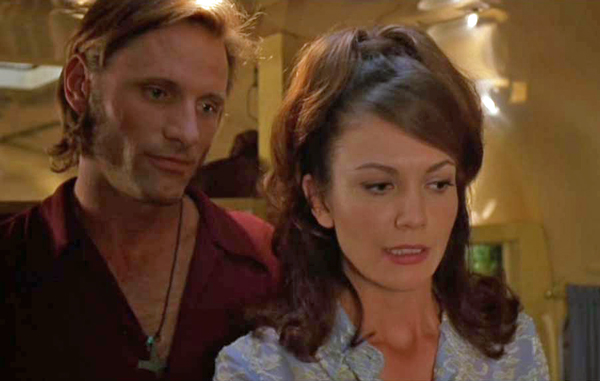 © Miramax Films / Village Roadshow.
Inhibitions are one condition of the human experience that no one can escape. For some, they're minor irritants that keep the individual from going off the deep end. For others, they define a lifestyle. The American culture of the '50s and early '60s was anchored in inhibitions. It was a black-and-white world of Father Knows Best and Mother Knows Her Place. Then came the late '60s, the Age of Aquarius and Woodstock, of drugs and free sex, and of anti-war rallies that rocked the Establishment. Tony Goldwyn's directorial debut, A Walk on the Moon, immerses us in that era, electing to recount the transformative power of the time by focusing on one woman's story.

The year is 1969. The setting is a Jewish bungalow community in the Catskills. Unlike in Dirty Dancing, where Jerry Orbach played a rich patriarch who could afford to spend a vacation with his family, A Walk on the Moon looks at the lower middle class. Instead of staying in clean, well-maintained hotel rooms, the characters in this film spend their days and nights in a ramshackle little house where the youngest child sleeps on the floor in the kitchen. Since Marty (Liev Schreiber) can't afford to take a whole week off from his job as a TV repairman (especially with the Moon walk coming up - everyone wants to have a working television), he can only join his family in the mountains on weekends. That leaves his wife, Pearl (Diane Lane), alone there with the kids and her mother-in-law for the rest of the week.

The typical rhythms of Pearl's camp life are interrupted by the arrival of the "Blouse Man" (Viggo Mortensen), an itinerant salesman who travels from resort to resort in a converted bus, hawking his wares at cheap prices to eager customers. The Blouse Man, whose real name is Walker Jerome, is affable and sexy. And, when it comes to inhibitions, he's the opposite of Pearl. She's a captive in her marriage - wedded at 17 because she was pregnant, she has seen every dream die over the years. It isn't that she doesn't love her husband, but that she yearns to see where her life might have gone had things worked out differently. "Sometimes," she confides, "I just wish I was a whole different person." When it becomes obvious that Walker is attracted to her, and she to him, she embarks on a reckless affair with him as a means of breaking free from the constraints of her ordered life. They make love in his bus, share a blissful day in the wilderness, and attend Woodstock together. However, when Pearl's mother-in-law senses what's happening, she warns her son that his marriage is in trouble.

At its core, this is the stuff of a soap opera, but there's a key difference: Goldwyn and screenwriter Pamela Gray, along with the actors, develop fully-realized, complex characters rather than the hollow shells typically used as human props in sudsy melodramas. Because the film takes the time to explore Pearl's personality and make her real to us, we understand why she acts as she does (we all have similar impulses from time-to-time; whether we act on them is another matter). Her motivations are as important as the consequences of her actions. Giving the most accomplished performance of her career, Diane Lane effectively conveys how Pearl's awakening sexuality affects every aspect of her life.

As the Blouse Man, Viggo Mortensen is rugged and attractive, but the character is underdeveloped. In a way, this is unimportant, because his primary function is as a catalyst. Given meatier roles are Liev Schreiber and Anna Paquin, as Pearl's clueless, cuckolded spouse and rebellious teenage daughter. Schreiber in particular offers more than one might normally suspect from this part - he plays the betrayed husband with great sincerity and sympathy. Paquin, the young Oscar winning actress who is making a career out of portraying American teens of all flavors (see Hurlyburly and She's All That for a study in contrasts), plays a 15-year old who is both jealous and resentful of her mother's newfound, illicit freedom. The part requires a fair amount of subtlety, and Paquin shows that she's capable of capturing all of the nuances.

Goldwyn, in his first venture behind the camera (after appearing in front of it in films like The Substance of Fire and Kiss the Girls), shows a knack for downplaying melodrama and developing atmosphere. Moments of light comedy keeps the tone from becoming too heavy without sabotaging the movie's dramatic underpinning. The anticipation and excitement surrounding the Moon walk feels right, and the brief re-creation of Woodstock has an amazing verisimilitude. (Instead of gathering tens of thousands of extras for the crowd scenes, Goldwyn used the less-expensive method of computer generating all but 300 of the revelers.) And the dialogue is intelligent, not a stream of platitudes and clichés.

Following its world premiere at the 1999 Sundance Film Festival, A Walk on the Moon received a standing ovation from the 1300 viewers in the Eccles Theater - an occurrence that's a testimony to the film's emotional strength and truth. It's easy to make a bad movie about a woman finding herself by cheating on her husband, but difficult to fashion one that hits most of the right notes. With a strong assist from Lane and Schreiber, Goldwyn has taken the nostalgia of 1969 and used it to good effect as background for a story that never loses sight of the characters.
Top of this page
Last edited: 23 June 2008 11:43:36