Capable Of Many Things

Source: Fréttablaðið
Most people know who Viggo Mortensen is, the man who rose to fame for his role in The Lord of the Rings. Fewer people know that he is also a photographer, painter, poet and musician, just to name a few. Hanna Björk Valsdóttir met Viggo at the Museum of Photography where museum staff were working hard preparing for the opening of his exhibition. 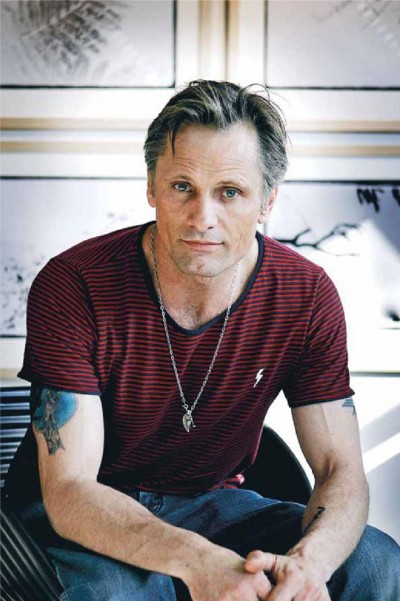 The photos of the exhibition are mostly of trees or taken in a forest. Lights and shadows play a big role but some of the photos are also black and white. Dreamy and poetic photos show the artist's perception of the world. It seems no art is irrelevant to Viggo. In addition to photography, he paints, writes poems and music and publishes books by himself and other artists, and also CDs containing his own reading of poems. He often mixes poetry with photography and in the exhibition there will be poems in addition to the photos, his own and poems he has chosen, Icelandic ones too. Everything is connected. Photos, words, stories.

After we have walked through the hall he sits up against a wall on the balcony and smokes cigarettes that he has rolled while he talks.

The exhibition at The Reykjavík Museum of Photography has been in the making for just over a year. "I decided to take photos of trees for this show because there are no trees in Iceland. I decided to bring trees to Iceland," Viggo says and smiles.

Along with the exhibition, his publishing company Perceval Press is publishing a book called Skovbo, the one that lives in the forest. "I feel good around trees. Where I lived in Denmark there was a forest and there is something in the forest that makes me feel good. They might also remind me of Argentina where I lived as a child. I have the same thing to say about the ocean; I feel really good near the ocean. I can live without constantly having the ocean or trees, but I am most content where I have both. But I can also travel in a desert or in Iceland. I feel really good in Iceland," Viggo explains and it is clear that he is very fond of nature and he seeks to be alone in nature.

Viggo has been to Iceland several times before and likes it a lot. "I've been here in every season. I am very fond of how the weather and the light changes suddenly here. It's very intense. I came here first with my son. I think it was the Icelandic Viking stories that brought us here. I thought it was really great to see places where the names were still the same as in those stories.

Viggo has come a long way as an actor; he became very popular after his role in The Lord of the Rings and he was nominated for an Oscar this year for Eastern Promises. Most big actors have a hard enough time with that kind of career. But is he going for the same career in photography?

"I didn't become an actor to become famous but it has given me opportunities that I wouldn't have got otherwise, like working with David Cronenberg or being in the Spanish movie Alatriste. Everyone can get lucky, but it is what you do with that luck that matters. I am trying to do my best with that situation. I had been an actor for many years but it wasn't until The Lord of the Rings that people really knew who I was. But I also had been taking photos long before I started acting. These things are very similar. It is about being awake, being alive and noticing what is going on around you. We all notice different things and have different experiences. What we do to express our experiences comes first. A photo, a painting, a poem or music that we use to express our experience is not the main thing, but what you are expressing. How you sense the world around you is art in its own form. To stop for one silent moment and just see what happens. I have been photographing for a long time and I always notice things that I am interested in more and more, and that's how you become better at what you do and learn. I want to get to people with these photos and I want to people to come and see the show; this is about me expressing myself in an honest way. If I start taking photos or putting up shows that I think people will want to see then I will fail, just like directors who do that fail."

People often try to put other people in a single category, either you are an actor or a photographer. What do you think about that?

"I think everything is connected. I take photos to connect to the world and find out how the world connects to me. Everything you do is connected in some way. It's about doing things you are used to doing in your everyday life and that somehow becomes some kind of art. Something makes you think. You go to an exhibition and it might not be a good one, but you stop to check out one photo; one photo is enough to make you stop and think about certain things in your life. It doesn't have to be a photo; it can be a short story or a poem. People stop in different places."

Is acting different than the other artistic things you do?

"No, putting up this exhibition is kinda like acting. We are moving things around the hall. Seeing where they fit, and choosing. Telling people what to do, then I might take a walk and when I come back the people here might have done something else. Everyone does their part in the same way as a director, a writer, the producer and actors do their best to make the best movie they can. The result is because of teamwork and I must say that the people here at the museum have been really good."

Viggo admits that all the activity that comes with big movies doesn't charm him but it of course comes with the job. He has little interest in publicity that takes just as much time as acting in the movie, but working with interesting people and directors is what is fulfilling and he will keep doing it.

"There has been too much going on these last years and there is a lot to come; that's why I will have much less time that I wish to attend to my art. That's why I try to use my time well. This is only me and my camera. I sit down and watch the sky, stop, and maybe sing a little or write something down. When I have time to do that, I am as happy as I can be. My life has been very crazy lately and I haven't had much time to do these things, but when I can I am at my happiest. I feel best with myself and when the opening is over, I have two days off and I am going to drive straight into nature and spend time with myself. I feel best in nature, away from people. Some people always have to be with someone; I am not like that. I love being alone and especially in a beautiful landscape and when it is very quiet around me. Then I forget everything else. That's why I feel good in Iceland. I once came here in July and drove out to the country with my camera. I rarely slept because the sun was still up at midnight and I just kept going; after two days I was in good balance and totally rested even though I almost hadn't slept at all."
Top of this page
Last edited: 22 July 2008 14:35:03
© Fréttablaðið.