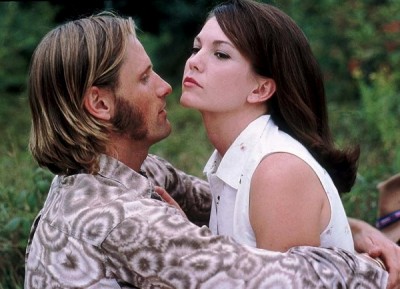 © Miramax Films/Village Roadshow.
It can't be easy making a Summer of '69 drama and successfully dodging all the Moon walk and Woodstock cliches. But somehow, that's what former supporting actor turned director Tony Goldwyn (the bad yuppie in Ghost), manages to do in A Walk On The Moon, his debut behind the camera.

It is the story of a discontented Brooklyn housewife, played by Diane Lane, who succumbs to the spirit of that summer while on vacation in the Catskills and has an affair with a enigmatic free spirit (Viggo Mortensen) ‹ and while the picture actually embraces the rampant and inevitable Moon walk watching, Vietnam talking and Woodstock going, Goldwyn refuses to let them weigh down his picture.

"That was one of the challenges of the material," Goldwyn said on a recent trip to San Francisco. "I read this script and it really moved me. It had so much going for it, and I thought, here's an opportunity to do the '60s in a real way. So that was the watchword in every department - the clothes, the props, the music, the acting - avoid cliches."

Not at all the yuppie-gone-bad type he's played in his highest profile roles in Ghost and Kiss The Girls, Goldwyn doesn't give off the air of movie star or auteur, despite his heritage as the grandson of a Hollywood legend, Samuel Goldwyn (the G of MGM).

In fact, he even looks slightly out of place wearing jeans and a T-shirt in the stale board room of San Francisco's Prescott Hotel. And sure enough, he says he had a "pretty normal life" as a kid.

"My parents kept us sheltered from this world of Hollywood. I don't have any great memories of bouncing on Cary Grant's knee or something like that." He never wanted to be a part of the movie business, he said, until the acting bug bit in high school.

His humble acting debut was in a Friday The 13th sequel - "I got skewered through the chest after uttering about three words" - and his career as a supporting player is spotted with hits and misses, but of his more regretful roles, the rookie director says "I don't know that the chemistry of my career, if it hadn't gone the way it did, if I'd be directing this film, which has been the greatest experience of my life."

As a director, Goldwyn shows great promise. A Walk On The Moon touches on, to some extent, all the trapping of the late '60s, but it never for a moment feels like a stereotypical train wreck of Boomer banality, even though key scenes revolve around Woodstock and other notable events.

"In recreating Woodstock, I wanted it to be a very subjective experience. Not big or broad, not featuring Woodstock as we've seen it 2,000 times. I wanted to find a way of portraying it where you saw the reality of it - you buy it, you're there - then you get into the character's experience."

Side-stepping cliches in the Woodstock scenes was difficult, Goldwyn admits. He deliberately avoided the more famous music from that concert festival ("We have Jefferson Airplane, but we didn't use White Rabbit.") And he had backup wardrobes ready for extras who showed up in too much tie-dye.

"I had our wardrobe people ready with a ton of clothes so when people brought stuff that made us all go 'No, no, no!,' we could say 'wear this' so we didn't have the stereotypes peppered throughout the crowd."

Making the summer of '69 largely a backdrop was aided considerably by a cast that brings to the forefront a potent, underlying sense of family history. Lane, as Pearl Kartrowitz, subtly reveals a dormant regrets about her early marriage and starts to behave differently toward her husband (Liev Schreiber) and petulant teenage daughter (Anna Paquin).

Goldwyn had no actors in mind as he began pre-production on the picture and said this was "a very trick movie to cast."

"My first assignment was to find Pearl, and Diane wasn't even on my radar screen." Goldwyn remembered. "But when I met her, she just was possessed inside of all the qualities I wanted in Pearl. Even though she doesn't seem like a Jewish girl from Brooklyn, it didn't matter to me. I knew she could go there. I knew she was the one."

The rest of the leads also seemed to just click into place during the auditions. Getting Viggo Mortensen was Goldwyn's only "moment of panic," the director says, because he wanted a free spirit type, but definitely not a hippie, and he had his heart set on the actor from A Perfect Murder, Gus Van Sant's Psycho.

"When I saw some of Viggo's work, I though, that's always who I've had in my head. I realized there is not one other actor anywhere who could play Viggo's part other than Viggo. He has this kind of complexity and mysteriousness to him. He doesn't have to say much and you get a lot."

He got the same sensation watching Schreiber in The Daytrippers and Paquin in Fly Away Home.

"All the actors fell into place," he said with a residual breath of relief.

He also seems relieved to hear someone compliment him on his successful use of that summer as a backdrop without being overwhelmed by its monumental events. He may have had to justify the setting more than once while trying to get it made, because he's still speaks like he's a little bit on the defensive.

"Look, that summer did happen. Those things did happen almost on top of each other. It was real, and it was a perfect metaphor for me of this woman's experience."
Top of this page
Last edited: 19 June 2008 14:59:11