By Einar Fal Ingolfsson - translated by Rosen and Ragga 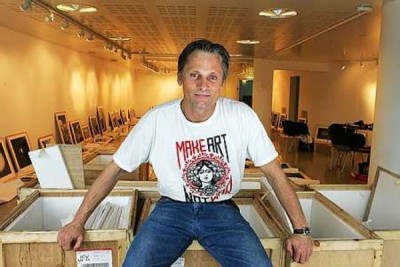 Skovbo Exhibit in Reykjavik, Iceland - ….
© mbl.is/Einar Falur.
"I have brought far too many pictures," says Viggo Mortensen, with his hands placed on his hips and with a half-desperate look, glancing over the room in Ljósmyndasafni Reykjavik at Tryggvagötu. In the middle of the floor some big wooden boxes are standing and spread all over the room are photographs with 150 framed photographs; in colour and black/white. "Well, I will have to consider taking some down," he says and begins to wrap a picture into its paper again. "These ones will go to the exhibition in Roskilde in October. I'm concentrating on the forest theme here."

The photographer who works here in his stocking feet is wearing a T-shirt with "Make Art Not War". He is sometimes called a renaissance man in art. No wonder since he does many artistic things; writes poetry, paints and takes photos, has his own publishing company and publishes books by himself and other artists, publishes CDs with his own music and he is also a movie actor. That is the factor he is most famous for. Mortensen has taking part in more than 25 movies but he became really famous for his role as Aragorn, the king of men, in Peter's Jackson's trilogy, The Lord of the Rings by Tolkien. Recently he's received much praise for his performance in the two David Cronenberg movies, A History Of Violence and Eastern Promises, for the second one he received an Oscar nomination.

Over the last few years, the Danish-American Mortensen has acquired a group of so-called Icelandic friends, he has twice travelled around the country with his son, who is now 20 years old. He once came here to experience the peace and quiet and take photos On one of his trips he saw an exhibition of Georg Guðni's work at the Icelandic Museum of Art. This meeting caused Viggo, shortly after, to publish a wonderful book about the Icelandic painter. Now he says that he has been preparing this exhibition, "Skovbo - Home in the Forest or Forest Man" for two years.

Almost moved to the Faroe Islands

By coincidence Mortensen's exhibition is the next one after this interviewer's exhibition. He had requested that I shouldn't take down my art until he had arrived and we talked while one put up his stuff and the other one took it down. We were surprised that we often paid attention to the same things in nature and both used our cameras to keep some kind of a diary.

"Many people keep diaries to put down their experiences in life and to not forget," Mortensen says. "It gets into a habit like everything else. I have my camera here with me and even though I haven't used it today, I pay more attention to the form and colours of my surroundings than I would if I didn't have it. Everything really. Everytime I went out to the balcony today," - he goes outside to smoke cigarettes that he rolls himself - "then I noticed how the sky and the light had changed. That is one of the things I like so much here in Iceland, the situations are always changing. That probably makes movie making here difficult, that constant change must make film makers crazy," he says and smiles. "It was similar in New-Zealand. When we were filming The Lord Of The Rings there I took a lot of photos. It is the same in the Faroe Islands, the weather is always changing." He continues to glorify the Faroe Islands and says that he almost settled down there once.

Viggo Mortensen's photographs can be explained as poetic; sometimes the focus is shallow, a lot of movement, light sometimes leaks into the pictures and makes weird influences.

"There are no limits to what a artist can do," he says. "And trees are interesting! In my photos there are often trees. I started thinking more about that when I was invited to show here and last year I took a lot of photos of trees everywhere I was and I travelled a lot. I thought it was a great idea to bring trees to Iceland, there are not so many here!

I've photographed a lot with Leica and Hasselblad cameras but last year I started using disposable cameras. They won't be available a short time from now so it was good to use the opportunity while I could and play with them. I often expose the pictures for a long time, shoot directly into the sun. A lot of interesting things happen when the light goes through these unclear plastic lenses. The photos become different. Sometimes I throw the cameras to the ground to loosen the lens a little bit, then interesting things happen. Then you check out the films and choose the best ones. I have an opinion of how I want them to be."

Everyone is in their own dream world

You can feel the poet in many of these photos.

"That sounds good." He laughs. In his books Mortensen often puts his photography along with poems by himself and other artists. On the walls of the Museum he also plans to put up poems, by Gyrðir Elíasson and Þóra Jónsdóttir along with his own, and Emerson and Hamsuns to name a few. "These are poems I am drawn to and how I write myself. This is all an outcome from a long process, I've been writing, painting and photographing for a long time. Sometimes I see something, like a dead deer on the side of the road, stop the car, step out and try to find the right angle. More often I shoot in a matter of seconds, let my feelings and style control me. You say that the photos are poetic, I think that is okay, but I don't know why they are like that, this is just based on my experience and is how I find it interesting to look at the world.

But you know, no one looks at the world like it really is. Everyone looks at the world like they want it to be. When it comes down to it, everyone is in their own 'dream world', we could become crazy if we thought of the world like it really is.'This is a man that works in the so-called dream factory of the movies, yet he talks with pure conviction.' We can put this on to photography and say that what I photograph is real. But if you and me would photograph the same thing, the angles would be different, people are always interpreting and changing what they see."

Travelling can stop people from going to war

Many of your pictures have place names and it can be seen that even though you travel all over the world the experience is always personal.

"It is good for everyone to travel. It is especially good to travel around with kids, it is a good way to stop them from going to war. If you as a child were in a foreign country it is harder for you to convince yourself that it is okay to bomb that country. Travelling is about experience and connection with people.. I love to travel, I never get tired of it - sometimes you get physically tired," Mortensen sighs and smiles a bit tired. No wonder since it's only a week since he finished his acting in the widely talked about story by Cormac McCarthy, The Road directed by John Hillcoat, where Viggo is in the leading role. Last year he was in two movies, Good by Vicente Amorim and Appaloosa by Ed Harris. Mortensen says that three movies with everything that comes with it, can be a little too much. He keeps talking about tiredness and says that the most tiring thing he does is being forced to do something, that interrupts the other demanding part of the artist's life, like presenting movies.

Now he grins. "The presentation part can take a longer time than the shooting itself. But I'm happy if I get only a few minutes for myself everyday, I'm much more relaxed if I get to control my time a little bit. That is one of the reasons why I like it here. When the exhibition opens next Saturday I'm going to enjoy meeting people and chatting, it's always fun to get reaction to your work. I'm really looking forward to it. But when the opening is over I'm going to rent a car and drive around the country for a few days. I look forward to that too.

The last time I was here, I had been working a lot. Georg Guðni wasn't at home and I went directly out to the countryside, it was in July and I photographed for 2 days in a row. Almost didn't sleep. That was excellent."

The night is coming, we walk downtown and sit down at a coffeehouse. I ask Mortensen if the fame that followed Lord Of The Rings didn't change his life.

"Yes," he says, "people sometimes recognize me on the streets but in Denmark and Iceland it doesn't matter that much. People are usually polite and let me be. Then there are other places that I have been in, like Argentina and Spain where people can get really crazy." He laughs and shakes his head. "It can be fun though, in a way.

Fortunately fame like that doesn't last. I've always been lucky these last years to be in movies that people appraise but don't get crazy over.

Dreams about becoming famous wasn't what got me into acting to begin with, but the dream about telling stories. Of course it is fun when people say that they are happy with your work, just like you want people to like your photos rather than find them horrible. I have an ego like everyone else but that doesn't mean that you are looking for fame like the one that we got in The Lord Of The Rings.

The world's attention fades soon unless you do something to keep you in the spotlight, but that also means that you would have to be in the most notable movies. Movies are a wide world, you could just stay there and learn more and more but I want to do something more. Now I have a few books by other artists that I have to put together and publish.

Your fame in movies must help with making your dreams come true, like financing your publishing company.

"I've been lucky in life. But it is a matter of how you work with it. I'm always trying to learn and use the opportunity that comes along, stay in contact with the people around me - and it is so interesting and rewarding to work with art."

When we walk out of the coffeehouse a man comes up to us. I'm thinking that he must be going to ask Viggo Mortensen for an autograph - but he just wants to give us some advert from the strip place next to the coffee shop. "There you see," Viggo Mortensen says laughing, "everyone is so polite in Iceland."
Top of this page
Last edited: 15 June 2008 05:55:03
© Morgunblaðið.