Viggo Mortensen - Man of the Week

By Einar Falur - translated by Ragga

Source: Morgunblaðið
The Man of the Week is an American movie star who is capable of many other artistic things. Tomorrow he opens an exhibition of his photos at the Museum of Photography in Reykjavík. 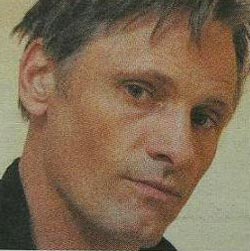 Where are you from?

At the moment I'm from here.

Are you getting paid as much as I did for answering these questions? I didn't believe how much I would get, 30,000 Euros is a lot. [Asked by the previous Man of the Week, Dustin the turkey (a puppet that was Ireland's entry in the Eurovision Song Contest).]

I'm not getting nearly as much.

What were you going to be when you grew up?

How much do you benchpress?

I have no idea.

Have you met an elf in Iceland?

I think I saw the shadow of one.

Or some forest people, since we have started this kind of talk?

They are always right in front of you but you can only hear them. I haven't seen them.

At this moment neither. Rather have "mate".

How is it to fight naked in front of so many people on a set?

Ridiculous! I just have to say that.

What is the most embarrassing thing that has happened to you on a set?

There are so many things.

Have you seen an Icelandic movie?

You are kind of a renaissance man, what art form is the most demanding: painting, acting, photography or poetry?

You have acted alongside many great actors, for example Sandra Bullock. From which actor did you learn the most?

If you could choose one of your films that you would want people to see, which movie would it be?

Alatriste. That's a Spanish movie from 2006.

If you could choose another one that you would not want people to see, which movie would that be?

I figured out a long time ago that there is no point in telling people what they should or should not do.

Your dream role and dream director?

None, the last few years I've been very lucky with roles and directors.

What book would you recommend?

Have you met someone from the Russian mafia?

What delusion about you is most common in people's minds?

That I am a member of the Russian mafia.

Have you ever wanted to play a woman in a movie?

I almost did once. It was actually a transvestite. I don't have a burning desire, I feel feminine enough.

What do you want to ask the next Man of the Week?