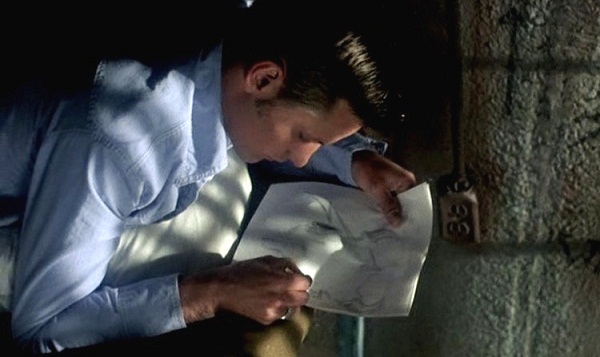 © Empire Pictures.
The independent horror film may have exploded in the Seventies, but its continued success throughout the Eighties solidified it as a commodity. (And that's just about the only good thing that happened in pop culture during the Eighties - remember that gawdawful music?) Down the ensuing years, Prison has proven considerably less popular and influential than some of its peers like A Nightmare On Elm Street or The Evil Dead, but it's easily one of the best horror films of the Spandex decade.

When the decrepit old Wyoming State Penitentiary (which is actually where the film was shot) is reopened to accommodate an overflow of inmates from other facilities, the vengeful spirit of a wrongfully executed man is awakened; the crooked guard whose testimony sent this man to the chair is now the crooked warden of the crumbling prison. At first, the waking nightmare of prison life - a dehumanizing monotony periodically broken up by brutality - ensures that only a few of the prison's occupants notice that anything is wrong. Before long, however, a series of grisly deaths has both inmates and staff panicked. On the surface, Warden Ethan Sharpe (Lane Smith) remains in denial, blaming the growing body count on troublesome inmates while his guilty conscience propels him to new heights of sadism and erratic behaviour.

The influence of Elm Street - a huge hit at the time - is readily apparent here as the malevolent spirit becomes a part of the building itself and inanimate objects spring to life as malengines. A solitary confinement cell suddenly turns into an oven and roasts its unfortunate occupant alive; another prisoner escaping through a space between walls is simultaneously impaled, crushed and torn apart by support beams, pipes and cables; a napping guard meets a nasty end when a length of barbed wire wraps itself around him like a boa constrictor. (Giving credit where it's due, the producers of Elm Street are reputed to have been very fond of Phantasm, but let's not spend too much time chasing our tails.)

An effects-heavy film? Absolutely. Violent? Extremely. And yet Prison is by no means a slave to its own visuals like so many other films (horror and otherwise) we could all name. The script and performances - often the major casualties in otherwise solid horror films - are surprisingly good, certainly more than strong enough to avoid being dwarfed by the effects. The cast is particularly impressive, a highlight being Smith's hardass warden; he's a perfect barometer for the growing tension as we watch him becoming more dangerously agitated by the minute. Viggo Mortensen does his best strong silent type as our car thief protagonist; Lincoln Kilpatrick is memorable as a grizzled old lifer who knows the warden's secret. Supporting players are a rogue's gallery of tough-guy character actors from the period, the type who'll have you muttering, "Hey, it's that guy who played, um, that other guy in that other movie..." Arlen Dean Snider is two hundred pounds of crew cut as the tough but decent head guard, and Stephen E. Little is suitably malevolent as a prison wolf (for those of you who've never actually done time, that's a prison term for an inmate who preys sexually on vulnerable first-timers).

Finnish director Renny Harlin would go on to helm Die Hard 2, Cliffhanger and Deep Blue Sea; the man could hardly be described as a cerebral filmmaker, and yet Prison sees him deftly framing wild visuals and fantastic subject matter within a realistic depiction of the all-too-human tragedy that is incarceration. Most of us don't demand profundity from a horror film, and granted, we don't find it here, but Prison deserves props for being much smarter (and more dignified) than most of us expect a B-movie to be.
Top of this page
Last edited: 6 May 2011 09:44:32