Source: Los Angeles Magazine
Actor Poet and Psycho Star Viggo Mortensen is now a painter to boot. Is there anything this guy can't do? 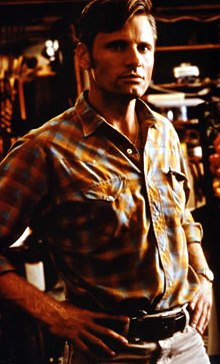 © Universal Pictures.
Sometimes art imitates art. Fans of A Perfect Murder know that Viggo Mortensen (GI Jane, The Portrait of a Lady) can play a painter, but now the artist formerly known as an actor is showing what he can do with oils offscreen.

After painting all his character's dramatic oeuvre in the Michael Douglas-Gwyneth Paltrow hit, Mortensen took up the brush seriously, and on November 21 his first art show, a mixed-media exhibit, opens at Track 16 in Santa Monica's Bergamot Station. An accompanying book "will have poetry and paintings and photographs," says the New York-born 40-year-old, a soft-spoken man with splatters of gray-green paint on his knuckles."And there will be a CD with poems and some songs that relate to the images."

In this winter of his content, Mortensen is also costarring in the new Psycho, playing Ann Heche's boyfriend. The way he sees it, canvasses and cameras have a lot in common. "Acting is just as much an art form as painting, music or writing," says the multimedia magnet, who seems constitutionally incapable of creative blockage. But he's easy on those less prolific. "You can't do and see everything," he reasons. "But you can try to observe what you do see. If your eyes see it, it's in you - one way or the other. For some people, it comes out in how they interact with other people or deal with their job or drive their car. It doesn't always have to be a movie or poem, painting or photograph."