Behind The Screens - Tough Guy 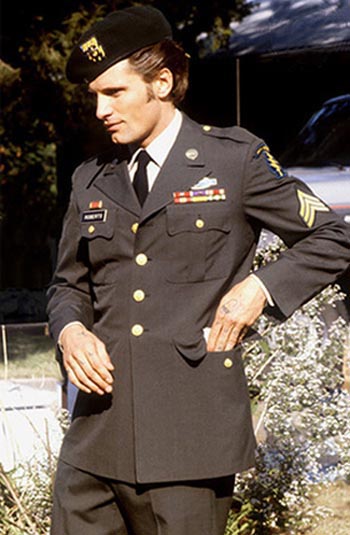 © Westmount.
In a pivotal scene in The Indian Runner, Sean Penn's first film as a director, a character named Frank Roberts suddenly attacks a bartender played by Dennis Hopper, who is cleaning blood off the bar. Is the blood symbolic of something that triggers the attack? "No," says Viggo Mortensen, who plays the violent Frank. "It was Dennis' breath."

At first glance, it's hard to associate the soft-spoken Mortensen with the I'm-going-to-explode-at-any-moment Frank Roberts. But take another look: With spaces between his teeth and the smell of cigarettes permeating his clothes, Mortensen isn't exactly pretty in the Beverly Hills 90210 sense. He's sexy and alluring in a dangerous way. And he does rage very well.

But if this 32-year-old actor is carrying around his own personal rage, he's not saying. "I wouldn't say I'm any angrier than anyone else I know," Mortensen says, dodging the first of many questions."I'm not trying to give you a hard time, but I don't think I've ever read an interview or heard what an actor had to say and cared more about them as people or their work - and usually it's less."

So talking about Frank Roberts - a mysterious, tattooed bad boy who clashes with his cop brother, played by St. Elsewhere's David Morse - is a chancy thing. "What I think about Frank has as much to do with my work, or the merits of the movie, as do the results of the box office," Mortensen says. "Absolutely nothing."

This much is certain: Mortensen was born in Manhattan, but the family moved around a lot; his father is Danish and "a businessman of some kind." Mortensen has two younger brothers who "juggle really well," and he's married to Exene of the rock band X.

Witness used Mortensen as an easygoing Amish farmer; Texas Chainsaw Massacre III used him for chopping. It's hopeless asking about his education, but Mortensen's not without a sense of humor, and he suggests we write, "We don't know whether he's had any formal education, and that may be the problem."
Top of this page
Last edited: 27 March 2008 16:27:53