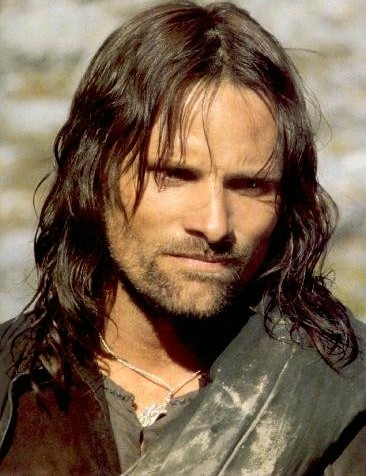 © New Line Productions Inc.
Viggo Mortensen, that rare actor who dislikes the limelight, told Sci-Fi Wire that he signed on for the role of Aragorn in the three upcoming The Lord of the Rings movies despite the fact that the films might transform him into a star. "I didn't have much time to think about it," Mortensen said in an interview, referring to the fact that he stepped in as Aragorn with no preparation after the departure during the rehearsal process in New Zealand of Stuart Townsend, who'd been deemed too young for the part.

"It's a decision I'll have to live with," said Mortensen, whose genre credits include Leatherface: Texas Chainsaw Massacre III, The Prophecy and the Psycho remake. "Ultimately, my son overheard me on the phone, and he said, 'You have to do that.' I said it was a long time away, and he said he could come over. And I decided that if I didn't do it, it would be something I would probably regret later. I thought I'd feel foolish not taking up the challenge. Now the way I look at it is The Lord of the Rings came to me as an unexpected gift. I had no idea it would be as tough or as interesting as it was, or as much of a responsibility and an honor," he said. "Whatever happens - if people take to it or not - I learned a lot, and it was a very worthwhile experience." The first Rings film, The Fellowship of the Ring, will open nationwide on Dec. 19.
Top of this page
Last edited: 19 March 2008 15:44:33