By Roland Huschke - translated by Sally

Source: Neon
In The Lord of the Rings Viggo Mortensen played a solitary person and in private life he is one too. For his roles he prefers to do the research on his own. 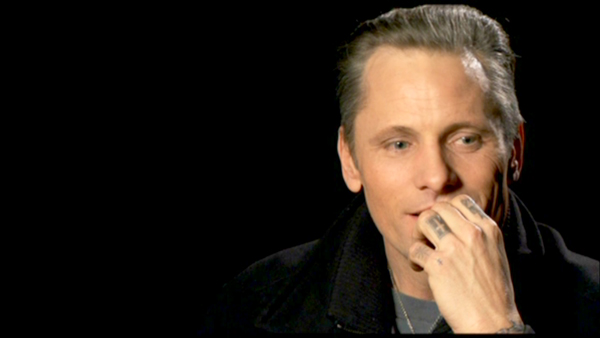 © Focus Features.
One would not be impolite. Moreover, it is a matter of importance for movie stars to draw attention on themselves at all times. But first of all one would prefer to only gaze at Viggo Mortensen, after he has shaken your hand. Even if he speaks so softly and looks so gently out of ice blue eyes, he still looks like a striking character. The enormous biker moustache, which we hope he has a role for. The soccer shirt of an Argentine club, with which not everyone would be allowed to enter this luxury hotel in Beverly Hills. The perfectly placed dimple on his chin - even more than on any screen, Mortensen is a charismatic person of the old school. The 49 year-old who looks ten years younger. Only when you check his feet is it somehow disappointing. They are stuck inside socks today, though it is known that his fad is for showing up at interviews barefoot. On Viggo Mortensen's wrist one discovers a small tattoo. Just a letter: H.

Is this the famous Lord of the Rings tattoo, which all the lead actors of the series got in a fraternal ritual?

No, nobody gets to see it because the memory of the filming in New Zealand belongs to us actors only. The H stands for Henry - my son. I got it tattooed to feel his presence when we are separated. It's more practical than constantly holding a photo in your hand.

Does he still live at home?

No, he's nineteen now and has left the nest. I'm still getting used to it. For parents it is difficult to see their child move out, you know, Henry is not only my son, but also my best friend and adviser. Without him, I would have never shot The Lord of the Rings, because I didn't know the books. He said "you can't ignore this opportunity".

Do you find any of your own characteristics in him?

We both want to control our lives on our own. I am proud that he follows his curiosity. One day he is interested in arts, then in history or natural sciences. I hope he takes his time to find his way. Today, young people are pressurised much too early to succeed, at the same time the soul needs time to search. I was nearly thirty when I began acting seriously. If I had known how long it takes to earn your living by doing this, I would have given up.

Did you have enough time in your youth to find your way?

I had the good fortune and bad luck to grow up in different countries. I spent my childhood in South America, before my parents moved to the state of New York when I was eleven. The culture shock was considerable. Nobody had an idea about soccer, no one spoke Spanish, and only one black man lived in the whole district. During this time, I became the solitary person that I am still today. Whereas Henry is more social.

How do you - as a solitary person - get along in a profession that requires so much collaboration?

In the job, I am part of a team and I respect the drivers no less than the director. But in private life, I prefer to be alone. Fortunately the photographers in Los Angeles leave me alone, because they can only take pictures of me with a supermarket bag. My work requires me to give an enormous amount of energy, therefore the rest of my life must be relaxing. If I always were ablaze with energy, I would be neither happy nor useful to my family.

Mortensen's identification with his roles borders on escape from reality. During the shooting of The Lord of the Rings he carried around his sword in restaurants and sometimes stayed in the woods. Before he began shooting the Nazi drama Good in Budapest, he visited the Berliner Philharmonie a dozen times, because his film character loves classical music. And when director David Cronenberg cast him in his new movie Eastern Promises as a member of the Russian mob in London after the incredible thriller A History Of Violence, Mortensen, of course, started with his preparations among gangsters. Yet he doesn't want to be seen as a method actor. "Every actor has some kind of method."

How did you get into the Russian circles?

When I got the job, I took the next plane to Moscow. Then I tried to adapt to the surroundings, walking through the streets for hours, going by subway and studying the people. In Russia, I travelled as far as the Urals. On the road, I also met people with a shady past, who introduced me, for example, to the tradition of tattoos with which Russian criminals mark their bodies. Not as decoration, but to signify their status within the hierarchy. In the film, I have 43 tattoos - and when I entered a Russian pub in London, wearing a T-Shirt, some people nervously changed their places. That made me very happy.

I am quite good at keeping a low profile.

Do you profit privately from the experience gained with all your research?

It can not be separated. I am not driven by money or fame, but by a thirst for knowledge. For Eastern Promises I went to bed with Russian audio tapes or during the day I ran Russian TV channels via satellite for half a year. I never understood everything, but you learn a language best when you are constantly surrounded by it.

And when a production is finished do you just shake everything off to be free for the next project?

No, I carry around a lot of nostalgia with me. For characters, cities, colleagues. Some actors complain that they can't cast off their roles. But I want to keep them as long as possible. Memories fade in the course of time alone. So why be in a hurry to erase them? It is said that every sin leaves a mark. That goes for good, memorable experiences too.

You mentioned earlier about money: What else do you indulge in except Russian language tapes?

I don't even drive a car. That makes me a freak in LA, believe me. I save my money for my family. Or I invest it into my company, publishing my other things and distributing it on my own.

The other things. These are CDs, on which the autodidact Viggo Mortensen plays piano. Books with his poems, exhibitions of his paintings or photos, where fans wait for 10 hours for the opening. Patiently he writes autographs just as long. Until a while ago, he also tried to answer every fan letter personally. "But it was just too much, I'm so sorry. Whoever sits down to tell somebody something personal, deserves an answer. " So he has the nickname in the industry: "No-ego Viggo." Of which you also become aware, when somebody knocks at the door of the suite right in the middle of the interview. Room service. A reason for him to talk to the waiter in Spanish for a few minutes.

Is it true that you declined an invitation to Academy membership?

Yes, but I don't want it to be misunderstood as being disrespect. Obligations lie ahead for me. Dinners, receptions, the Oscars themselves. With this, you would be even more a part of the machinery. I already have enough trouble trying to escape from that.

That is one of the strange aspects of my life. Well, my mother likes to read it. I, however, see only the mechanisms of the media that sell their products in a better way with lists of the 50 hottest bachelors rather than a story about the kindest plumbers in Manchester - that would be certainly more interesting.

Can you also see any positive aspects to your popularity?

Sure. The success of The Lord of the Rings made it possible for me to work with exceptional directors like David Cronenberg.

And outside of the film industry?

I am not a guy that makes big speeches. Once I was on a talk show after the beginning of the invasion of Iraq and I wore a T-shirt on which I had written "No blood for oil". Subsequently, the press made a terrible fuss about me. I don't want to have to experience that again. Although I regard members of our present government as sociopaths without moral compass or social conscience. But who doesn't?
Top of this page
Last edited: 16 March 2008 15:48:49
© neon.de.