Interview with the protagonist of Eastern Promises

By Gabriel Lerman - translated by Graciela

Source: Imagenes
This is the final part of an interview that appeared in the Spanish magazine Imagenes. The rest of the interview was information about Eastern Promises that many of us will have read before so it has not been translated. 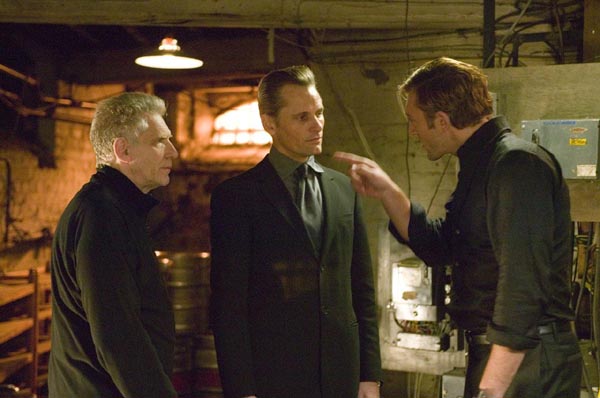 Image Peter Mountain.
© Focus Features.
What was it like to shoot in London?

I liked it a lot. I had done it before, but for not so long.

I've just finished a movie, Good, based on a play by C.P. Taylor. I play a German literature teacher in Berlin in the '30s, a family man. The movie is slightly different from so many others about Germany at that time, because it does not show the Germans from the US point of view, but from the point of view of the Germans at that time. People perceived that something was going on, something that affected their friends, but they didn't really know what was going on. It is a very interesting story; the rest of the cast are English, all very good actors. And I am about to start a movie with Ed Harris. He is going to direct a western in New Mexico called Appaloosa.

I guess we will see you riding a horse again. Did you learn with the gauchos?

No, but I knew them. I was around horses as a child, until I was eleven.

Was your father in charge of farm administration?

They had a farm in Chaco during the last years we were in the country [Argentina], and before that, in Pilar [province of Buenos Aires], he was in charge of a chicken farm, but there were also horses, and that's where I used to ride, especially in Chaco. We went back to the US in August 1969, when my mother took us to New York. Then we returned in July 1970, to spend the summer there, because my dad was still there. He stayed there working, then I did not go back to Argentina until 1995.

Did your father stay there?

He stayed for some years, and then he went to Denmark, spent some time there, went back to Argentina, and then went to New York.

You left in 1969, did you ever think that if you had stayed there, you would have been 18 at the time of the coup (translator's note: military coup that overthrew the democratic government), and that you would have been part of one of the generations that was hit the hardest by the disappearances caused by the dictatorship?

Who knows. Out of curiosity and to stay informed, I would have asked certain questions; I wouldn't have believed everything that was written in the newspapers, what they were telling me at home or at school. I don't know; maybe I would have gotten in trouble; I can't really answer because my life turned out differently. My mother took us to the US and that's how it was. But in 1977 and 1978, I knew what was going on in Argentina. Although I remember that in 1978, during the [soccer] World Cup, I was very aware of the situation. I had bet a box of beers at the factory where I worked. At the beginning of the tournament, I told them: Argentina will win. Because back then, nobody thought that Argentina would win [the World Cup], even if they were locals. And the truth is that when Argentina played opposite Peru, and they won 6-0, I realized that it was all pre-arranged (translator's note: Argentina needed that score to make it to the finals). Too much coincidence. Although I was very happy because they were World Champions. I remember I wished they had allowed Maradona to play. It was all very interesting, but I was also quite aware that those were very difficult times for Argentina.

Where does that progressive inclination of yours come from? Because I can imagine that when you lived in Argentina you probably belonged to the Chaco aristocracy. (translator's note: there is no "aristocracy" in Argentina; he probably means upper class.)

My father is Danish. He was a farmer in Denmark and an agriculture businessman in Argentina, but I would not say he was progressive. Maybe I travelled a lot as a child, which I still find interesting. And being an actor you inhabit someone else's skin, different people, and you keep learning, getting exposed to the world. That reminds you that there are more similarities than differences between all of us, be it Argentineans, Arabians, New Yorkers, leftists or rightists. Human beings are just human beings, and many of the horses I have come to know are very human.

How old were you when you left Argentina?

I was 11, and my brothers were 8 and 6. When we arrived in the US, we used to speak Spanish amongst ourselves. The youngest did not speak a word of English, but since kids learn fast, after two months he was already speaking English well, and now he can hardly speak Spanish. I kept the language, and I tried to read books and magazines in Spanish as much as I could.

In what sense do you think that traveling with your family has influenced you as an actor?

I don't know. Maybe I am more interested in other cultures. Any person that has been in touch with other countries and cultures is much more open. I think that traveling is a very good way of preventing wars, because knowing other cultures/people eradicates the interest in attacking them. I don't know if it has helped me to become a better actor, but it definitely helps me to create my characters.

How did you decide to become an actor?

Like with many other things, I was just exploring. I liked theatre and movies. When I finished school, I went to Denmark and lived there for some years. In Denmark, I met a girl that decided to move to New York, and I followed her, but I had no intention of staying for a long time. But she stayed, and so did I. While I was in New York, I decided to try acting and I started attending a drama school. That's how I started. If I had known how difficult it would turn out to be, maybe I would never have started, because when you start, they put you through a thousand auditions, and then they don't give you the part.
Top of this page
Last edited: 2 January 2008 04:20:06